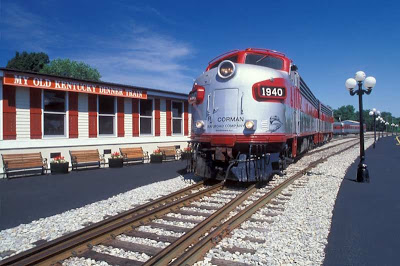 My Old Kentucky Dinner Train got its start as part of the old Bardstown railroad branch, originally constructed by The Bardstown and Louisville Railroad in 1860. Over the next century, the line would change hands from B&L to L&N to CSX to R.J. Corman, its current owner. The Corman company developed the dinner-train idea in 1988, and it's been a huge success. I wish more railroad lines would take a cue from My Old Kentucky Dinner Train's lead. 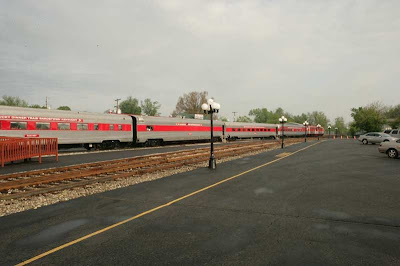 The Dinner Train consists of three dining cars and a kitchen car. All the meals served on the train are prepared on board by the train's Executive Chef and his staff while you're sent on a journey through some of Kentucky's loveliest scenery, including passes by the antique Jackson Hollow Trestle, the Nazareth religious community, and the Bernheim Research Forest.
Posted by JSH at 1:37 PM

Do you know the Kentucky Railroad Museum at New Haven? I visited in June and found, to my delight, a working steam locomotive and tender model that my grandfather had made sometime in the late 1800's.

How much does this cost to go on this dinner train?