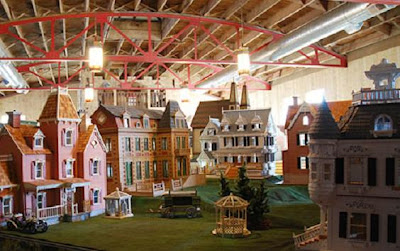 Next time you're anywhere near Danville, KY, swing by to check out their swanky new Dollhouse Museum.

Even if you're an all-American he-man red-blooded male who thinks dollhouses are girly stuff, give it a chance and prepare your senses for the disquietingly vertiginous feeling of walking amongst expertly prepared miniature buildings and people. It's like you're Godzilla walking through Tokyo (except Tokyo looks more like Little House on the Prairie or Wuthering Heights). 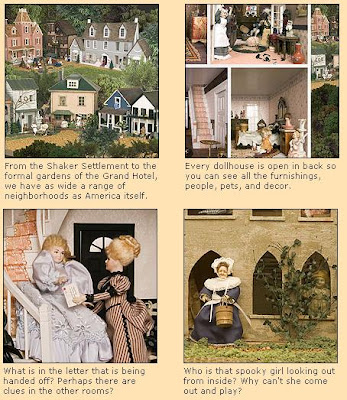 Actual dolls don't interest me so much, but I'm obsessed with miniatures in general (I know, I know, I'm obsessed with a lot of things), like the teensy-tiny pictures on the wall, the miniscule frying pans and ears of corn no bigger than a pinky fingernail on the tiny kitchen tables. If you haven't really paid attention to craft miniatures, like in the minatures aisle at Hobby Lobby, you probably don't get what I'm talking about. Immerse yourself in this museum and you might develop the same fascination with ever-diminutive size and scale and proportion.

They have a playroom for kids to actually get hands-on with some more durable examples of dollhouses, and a gift shop filled with books about dollhouse culture and miniature culture.