All my life I've been a degenerate record-collector-scum, having hoarded countless hundreds of thousands of 78s, cylinders, 45s, LPs, EPs, 8-tracks, cassettes, Mini-Discs, CDs and MP3s over the years. And if you're as OCD about it as I am, you understand that obsessives such as ourselves can't help but pick up obscure records at yard sales and flea markets by old cheesy lounge acts, and enjoy them for the kooky thrills they provide.

But among those, how many of them can genuinely be said to be GREAT, not just merely campy, kitschy or funny?

Meet the Rick Hipple Duo. Rick Hipple plays organ and provides some very Wayne Newton-esque vocals, while Lou Stansfield plays the drums. They performed their act at the Cabaret Lounge and the Robert E. Lee Inn, both in New Albany, IN, and also played at Holiday Inns in Louisville. 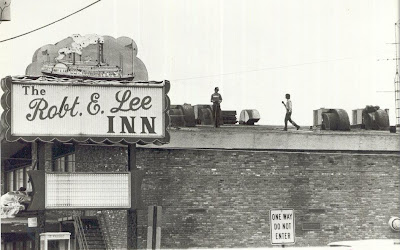 Sometime in the late 1970s the duo just disappeared. No one seemed to know what happened to them. Like so many other things in life, they probably were not truly appreciated until their absence was felt: "Hey, whatever happened to those crazy guys in suits who actually played "Aquarius" on the organ one night when my drunk girlfriend screamed at them to play it? They were a trip".

We now know that Hipple moved to Florida and released a solo record there, which is rumored to have found the man drifting towards ELP/ELO territory. Hipple tragically died of brain cancer a few years later. Where Stansfield went is still a mystery. A reliable source tells us he's a truck driver still living somewhere in Indiana.

It's hard to measure the influence of the Rick Hipple Duo. The JSH Combo has named Hipple as a great source of inspiration, sharing as they do a similar love for the Bill Black Combo. Kentucky Artists Steve Rigot and Cathy Irwin, who saw the duo live many times, painted a primitive neo-expressionist portrait of them which is now in the permanent collection of Louisville's Deatrick Gallery. The records Hipple released have no doubt provided puzzling evidence to many unwitting persons who plucked them for chump change in a junk store somewhere, and hopefully will continue to astound and inspire the youth of today who seek to unravel the arcane mysteries of the early 1970s.

Do you have any information about the Rick Hipple Duo? Please e-mail us and let us know!
Posted by JSH at 10:21 PM

According to this site http://creepsnewsroom.tripod.com/hippleduo.html--which stops in 2004--they were aware of four Rick Hipple Duo lp's--Soup to Nuts, Live, Rock around the Clock and Merry Christmas from. Odd enough, I've found none of those but have two others--The Big Men Downstairs Presents (pictures an illustration of Riney's Jockey Club", and a solo lp that's just titled "Rick Hipple". The "Big Men" lp is much earlier--the photos on the back look mid 60's, while the self titled lp is clearly mid to late 70's. Musically the "Big Men" lp is primitive and cool--with taut covers of "Pipeline", "Hip Hugger" and others. The solo lp is big cheesy organ for the most part.

I'm documenting all Indiana-produced lp's at www.indianavinyl.com. This includes the Hipple lp's if only because the solo lp was recorded in New Albany.

I created it several years ago, despairing of finding much info on Hipple online. I'm still trying to track down the whereabouts of Lou Stansfield.

Is the Rick Hipple LP a white and red cover with a drawing of him surrounded by keyboards? I saw that on eBay a few years back but was sniped out of winning it.