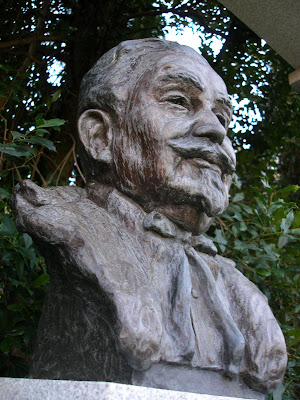 As if creating the greatest fried chicken restaurant ever and becoming a Kentucky iconic figure himself weren't enough, Harland Sanders led quite an interesting life even before he went into the bird business.

In his early adulthood, Sanders was a volunteer firefighter, a chef, a soldier stationed in Cuba, a traveling salesman, a steamboat operator, active Freemason (he underwent his initiation in 1917) and ran several small businesses of his own, including a gas station in Corbin.

It was in Corbin that his special way of preparing fried chicken became a great roadside success, and by 1932 a thriving restaurant and motel had developed out of it. Sanders Cafe Chicken was renamed Kentucky Fried Chicken in 1952, and the rest is history.

In 1980, Sanders died at the age of 90 of pneumonia and leukemia. He's buried under a visually striking monument in Louisville's Cave Hill Cemetery.
Posted by JSH at 9:32 PM

If I am not mistaken, his daughter made the sculpture of him.