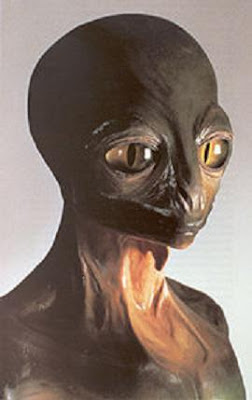 In the October 28, 1878 issue of the Courier-Journal, we find a story of a "Wild man of the Woods" being captured in the wilderness of Kentucky and placed on public display in downtown Louisville.

The mysterious humanoid creature was said to be over six feet tall, and possessing eyes twice as large as a human's. Try to picture that for just a moment - pretty horrifying if you think about it. What intrigues me most of all about the sketchy details of this news report, though, is that the monster-man in question purportedly had scales instead of skin.

Like so many Victorian-era news stories of the day, this one was treated rather matter-of-factly despite its outlandish subject matter, and was not followed up on in subsequent issues. Whatever became of this reptilian "wild man" is not known, and at this late date it's unlikely we'll ever know.

It's interesting to note, however, that the description of the lizard-man corresponds closely with paleontologist Dale Russell's theory of reptilian humanoids. (A model of his hypothetical "dinosauroid" is pictured above.)
Posted by JSH at 11:33 PM