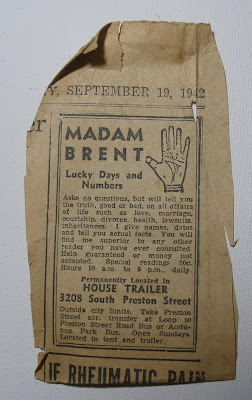 Today this scrap of a 1942 Louisville Courier-Journal newspaper fell out of an old book - a 1930s RCA catalog of radio tubes that I bought in Madison County in the late 1980s. I've shlepped the book around the many different places I've lived since then, and never noticed the scrap tucked into it until 2009.

The scrap seems deliberately torn out of the paper for the purpose of saving Madam Brent's advertisement, since the reverse side is only a truncated portion of an article.

I can't stop staring at it, wondering what it must have been like to drive down Preston Street (before it become Preston Highway) to a "tent and trailer" to see Madam Brent while World War Two raged on. And the longer I stare at the ad, other questions enter my head. Even in a 1942 economy, how did someone support themselves giving "special readings" way out past the edge of town for fifty cents? And being open for business from 10am to 9pm, seven days a week?

Was Madam Brent possibly, just possibly, selling something else besides psychic readings?
Posted by JSH at 12:44 AM