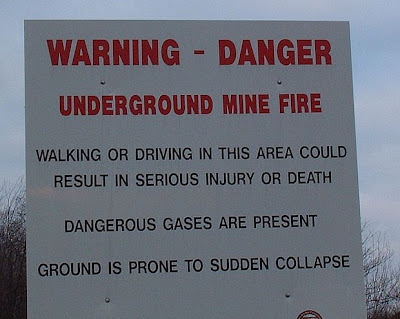 Many people have heard about the infamous underground coal mine fire in Centralia, PA, which has been continuously raging since 1962 and necessitated the total evacuation of the city. It is currently considered unstoppable and is burning for miles under the surface. The Centralia underground fire has been the subject of numerous documentaries, news stories, and articles.

But how many know that a very similar subterranean catastrophe is taking place right here in Kentucky?

The Tiptop underground mine fire in Bulan, KY (Breathitt County), also known as the Lost Mountain fire or "the Ruth Mullins fire" for the lady who discovered it, is burning out of control just below the Earth's surface and has been for apparently many years.

But how did this happen? Details are sketchy. An article in Discover doesn't really delve into the fire's origins. According to Earth Magazine, "No one seems to know how long it’s been burning, how much coal it has consumed, how it started or the dangers associated with it."

A report of scientific analysis of the outgassing fumes from the Tiptop fire paints an ecologically troubling picture:

At the time of our visits, concentrations of CO2 peaked at 2.0% and > 6.0% (v/v) and CO at 600 ppm and > 700 ppm during field analysis in May 2008 and January 2009, respectively. For comparison, these concentrations exceed the U.S. Occupational Safety & Health Administration (OSHA) eight-hour safe exposure limits (0.5% CO2 and 50 ppm CO), although the site is not currently mined. Mercury, as Hg0, in excess of 500 and 2100 μg/m3, in May and January, respectively, in the field, also exceeded the OSHA eight-hour exposure limit (50 μg/m3). Carbonyl sulfide, dimethyl sulfide, carbon disulfide, and a suite of organic compounds were determined at two vents for the first sampling event. All gases are diluted by air as they exit and migrate away from a gas vent, but temperature inversions and other meteorological conditions could lead to unhealthy concentrations in the nearby towns. 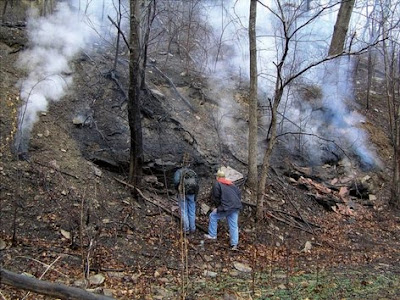 There are at least nine sites with major openings in the ground where the Ruth Mullins fire is venting, extending over a huge area that occupies both Breathitt and Perry counties. Many researchers believe that underground coalmine fires such as this (there are many around the world, especially in China) could be a major culprit in man-made global warming.

On the other hand, such fires can also be a part of mother nature's plan. An enormous mountain in Australia, once thought to be a volcano, has turned out to be a naturally-occuring underground coal-seam fire that has been raging for over six millenia.

And if, as many Native Americans believe, coal has a mind of its own, then the coal spirit may be well pleased by its own blaze of glory.
Posted by JSH at 8:38 AM

Is it possible to get to any of the openings with asking permission, or is it trespassing?