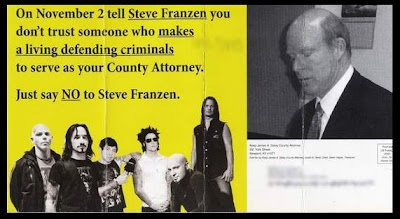 A political advertisement for one James A. Daley, Campbell County Attorney, has backfired in the worst way.

The ad accuses his opponent Steve Franzen of "making a living defending criminals". Hey, no shit, Sherlock! - he used to be a public defender. In America everyone has a right to legal representation, even though I know you prosecutors wish we could dispense with that quaint formality. The ad further illustrates its confused point by showing a bunch of black-leather-clad tattooed tough guy "criminal types".

Problem is, those men are all members of current rock bands - Disturbed, Stone Sour, and Avenged Sevenfold, all of whom are popular Warner Bros. recording artists. And they're not pleased with being portrayed as criminals, especially not for some two-bit politician's personal gain.

Franzen, a private practice attorney who works in criminal defense, said beyond being disgusted at the message on the flier, depicting these band members, who are in no way connected to him, as criminals is a violation of several laws including copyright, slander and placing someone in false light.

"We're talking about the county attorney here," Franzen said. "At the very least he ought to be able and willing to run a campaign within the bounds of the law."

Justin Verst, the chair of "Keep James A. Daley County Attorney," who paid for the flier, said it was produced by the group's paid consultants, November Strategies. Verst said the fliers did go out with his group's permission.

Everytime I start to get an inch of hope that the rest of the country and world atl arge doesn't view Kentucky as a redneck hellhole something like this happens.

Besides, they should have used GG Allin. He would have made for a much tougher criminal looking type.