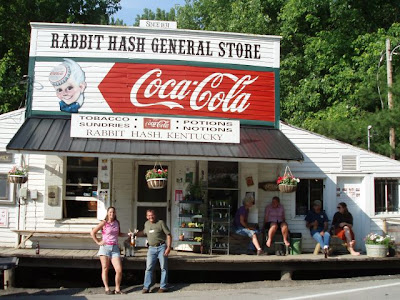 This biker-dominated town in Boone County is well known for its unusual name, its delightfully old-school general store, and its tradition of electing animals as mayors. Their current mayor is a border collie named Lucy Lou. According to Lucy Lou's campaign office:

She is in town every day and has appointed herself the town tour guide, meeting visitors and making sure they see all the sights. She's running on the non-partisan canine ticket and supports feline and canine presence in the General Store. Lucy Lou promises to lend her support to all fund rainsing events and activities. She accredits her aspiration to Rabbit Hash's esteemed former mayor, Junior Cochran, stating that he was her hero. 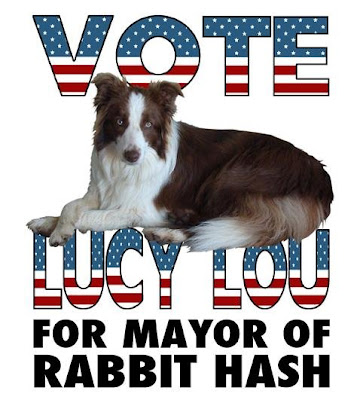 "The name Rabbit Hash may derive from the historic use of the local rabbit population as food. The hamlet's most notable building, the Rabbit Hash General Store, is regarded as the best known and best preserved country store in Kentucky. Rabbit Hash is unincorporated and therefore without fixed boundaries, which makes its exact population a matter of opinion, but the population is generally regarded as between four and 40 depending on how the boundaries are drawn."

A film documentary exists called "Rabbit Hash, Center of the Universe" which covers all these curiosities and more.
Posted by JSH at 10:54 PM

Animals for mayor. haha. That is a bit much!!!