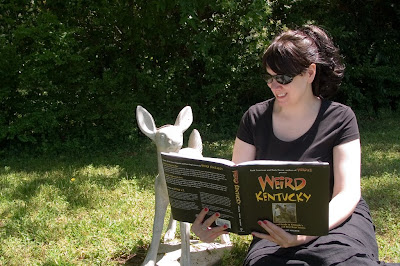 Someone once said, "No book is complete until Error has crept in and left its sly imprimatur". And so it goes for Weird Kentucky, which certainly has its share of glitches, errors, goofs, and unintended qualities.

Most of them, however, are subtle and unimportant things that you'd never notice - instances where I changed a word or phrase in a later draft of the manuscript, but an earlier draft being what inadvertently got published.

Others are more glaring, such as Minnie Adkins being referred to as Minnie Yancey, and the Kentucky State Fair being described as a Lexington event, rather than Louisville. There were a lot of cooks in the kitchen helping me on the book, though, and in all the commotion you have to expect a few broken eggs. Everyone at Sterling, including the Marks, did a great job on their end and between us all, I think we produced one of the more peculiar books of the series.

So I don't sweat the mistakes. After all, the book's hardly intended to be a scholarly reference work - it's simply a colorful and fun coffee-table book of rumors, legends, tall tales, stories, myths, and conspiracy theories. Of course, I could get these typos fixed if y'all would buy more copies (they make great Arbor Day gifts!) and insure that the book goes into a second edition!

(photo courtesy of Weird Kentucky contributor Eartha Kitsch!)
Posted by JSH at 12:09 AM

i got the book Weird Kentucky for xmas, its great!!!