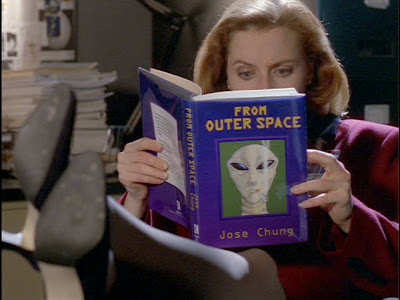 NUFORC's first UFO report of 2009 comes from Campbellsville, KY, and boy, lemme tell you, it's a humdinger. It's a convoluted and long story, told one stilted sentence at a time, with most sentences separately paragraphed. Here's an excerpt:

I remember the green lights were the color of a green LED such as that you would find on a computer monitor.

I remember I saw one BRIGHT light.

I remember a voice calling saying, "Drop the tunug." It was a robotic voice. I remember calling out, "I do not have anything in my hand." The voice said again, "DROP THE TUNUG."I started running. I remember praying in my head, "LORD, I am not doing ANYTHING wrong.. PLEASE save me. I will always serve you no matter what, so PLEASE help me." I remember this horrible pain going through my legs, and I fell to the ground.

I heard a clicking noise.

I remember someone walking up to me. They put handcuffs on me. I was told to get up, and not to move, or I would be shot with a taser.

I know a LOT about tasers. I remember that I was taken to a building.

It was a building, that i had never seen before.

When I got in, I heard the building making a low pitched humming noise, and there were several machines with lines, and other thangs going across their screen.

I was told to sit down.

I sat down in a little chair which had several buttons and cranks on it.

I saw a red button that said, "For emergencies only." I remember I was told to sit and be quiet or I would be tased again.

I was hooked up to a pulse oximeter, which monitored my oxygen levels, and a mask was put on my face.

I remember them saying my oxygen was VERY low.

I was taken to a little room, and was hooked up to an EKG machine which beeped to my heartrate.

I was then told to put my face up against this machine.

I remember my Mom had told me before NEVER to look into something unless I knew what it was.

Of the report, NUFORC states: "This report is an obvious hoax. However, we post it here, in order to illustrate to those who visit our site the type of stupidity our Center often has to put up with. Fittingly, we feel, the source of the hoax prefers to remain anonymous."

Now, you know and I know this story is 99.999999999 likely to be nonsense, and yet I have to say that there really is a truism in covert operations of any kind: if you're up to any top-secret CIA-type skullduggery, all you have to do to make sure no one believes it happened is to make the circumstances really stupid sounding.

Do I think for a moment that there's a chance that this is what happened here? Well, no, not really. But it does make me think that when the next team of DARPA/NSA spyboys decide to do some bogus-UFO-related psychological experiments on humans, they'll dress in goofy rubber alien suits and tell their victims to "Drop the Tunug!"

It almost sounds like a sleep paralysis episode -- which can be pretty common and usually incorporate imagery the experiencer is familiar with. So...I doubt it's a hoax. It's just a nut.

It does sound like someone's waking dream or that type of uncomfortable dream one can have when they've overslept a bit in the morning. In a way, it reads like something from someone's dream journal. "Drop the Tunug" sounds like, "Drop the turner." or tv remote, maybe they heard someone say something like that while they were asleep.