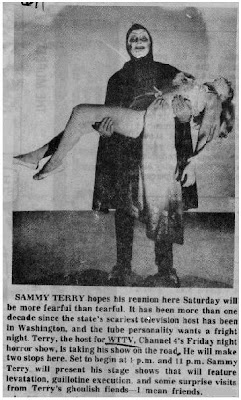 Though he was based out of Indiana, Bob Carter made hundreds of thousands of fans over the Kentucky border as late-night TV horror host "Sammy Terry" beginning in 1962, and then throughout the 60s, 70s and 80s.

The format of Carter's Nightmare Theater usually involved the showing of two films. During the commercial breaks, Carter, as "Sammy Terry," would engage in camp banter with the audience and his floating rubber spider, "George." This banter often included some commentary on the films being shown, which included classic films as well as many less-than-stellar productions common to the horror film era of the 1930s through the early 1960s.


Sammy's makeup has drifted over the years, sometimes being more clownlike than skull-like. He can still occasionally be seen out there making personal appearances, often for charity.
Posted by JSH at 12:24 AM

I never saw Sammy Terry. I guess that I lived too far to the south of Indiana. But, I used to watch Milicent B. Ghastly's MonsterPiece Theatre every Saturday Night following Saturday Night Live on Channel 18 WLEX in Lexington when I was in grade school between 1984-1986. I remember one chair that they used to have at WRFL that reminds me of a chair that used to be used on Milicent B. Ghastly's show. You can catch clips from Monsterpiece Theatre on the Youtube channel nolegsblueguy.

Dig that press secretary. She was a little fox.