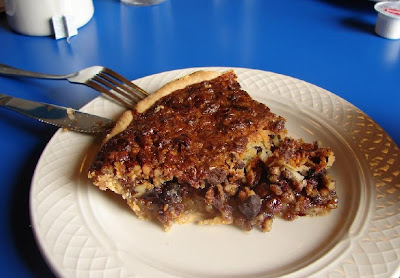 What is Derby Pie?

No really. What IS it? Well, it's basically a chocolate and walnut pie. Or sometimes pecans. Or sometimes other stuff, depending on whose recipe you use.

Sounds like nothing to write home about, right? And yet, this pie is often the center of raging legal controversies that continue to this very day.

Let's go back to the beginning. Here's what Wikipedia says:

The Derby Pie was created in 1950 by the Melrose Inn in Prospect, Kentucky as a specialty pastry. The restaurant's owners and Derby Pie creators were Walter and Leaudra Kern, who constantly researched the optimal recipe for their creation. They were assisted by their son George Kern. The name "Derby Pie" was chosen because the various family members each had a different name for the creation, so to resolve the naming quandary they put the various names in a hat, and pulled out the paper which said "Derby Pie".

Even after selling the Melrose Inn in 1960, the Kern family continued to make Derby Pie for select customers. In 1969 they trademarked the name Derby Pie to both the state government of Kentucky and the United States Patent and Trademark Office.

Now, that may indeed be so, but in all promotional materials related to the pie, the nomenclature is actually "DERBY-PIE®" with a hyphen. Also note that the alleged creators spawned Derby Pie in 1950 but didn't trademark it until 1969, well after it had already become a huge success and generally passed into the common vernacular. Back in the day, everyone made "Derby Pies". Some were similar to the Kern family's and some were not. The grounds for belatedly trademarking the pie - which really is not a rocket-science recipe to begin with - could be said by some to be shaky, since it had huge popularity throughout the 50s and 60s as an independent meme unto itself. An open-source pie, if you will.

Who cares? Well, some folks sure seem to. Read this:

According to this article, Rick Paul's White Light Diner, who'd already been in trouble with the Derby Pie people's lawyers once before, was selling something of Mr.Paul's own creation called "Kentucky Bourbon Pie". It's hard to make heads or tails of what Derby Pie's specific legal arguments were, but it seems to stem from a sort of "bait and switch" game Rick was allegedly playing, by offering Derby Pie on a sign but then serving his own "Kentucky Bourbon Pie" instead when you get inside. Is it sneaky? Yes. Is it devious? Yes. Is it ethical? That's debatable. But is it illegal? I would say certainly not.

The judge didn't see it that way, though. Behold:

Rick Paul, owner of Rick's White Light Diner, was found in contempt of court Monday and must pay $1,000 to a charity of his choice, for again infringing on the Derby-Pie trademark.

Before U.S. District Judge Joseph Hood in a Lexington courtroom, Paul was found in contempt of court for violating a 1997 permanent injunction signed by Hood, ordering Paul not to infringe on Kern's Kitchen Inc.'s trademark Derby-Pie.

I think if Mr. Paul had a better legal team, he could have fought this and won, and he still could if he'd chosen to appeal to a higher court or filed a suit of his own.

And for the record, I don't get the appeal of Derby Pie anyway. Blah. Give me my grandma's apple do-lollies any day.
Posted by JSH at 11:55 PM