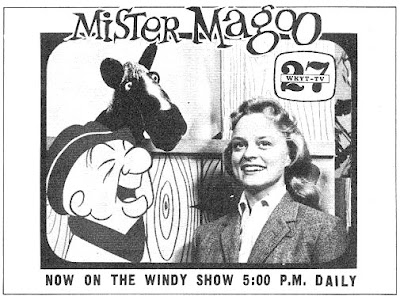 Like Happy's Hour, it was primarily intended as a vehicle to host cheap programming like Popeye, Mr.Magoo and The Three Stooges but soon the popularity of the host puppet became the real attraction. Here, that puppet was Windy the Horse, accompanied by his young female friend Mary Ann. Later characters included Windy's French cousin Maurice and a ventriloquist dummy named Harold Zink.

Everything was done live, without scripts and there were more than a few rough spots. Like the time a small monkey was brought on the show. "That monkey took one look at Windy and leaped, screaming up into the over head studio lighting equipment," Faulconer recalled. "After the 11 '0 clock news went off that night they were still trying to coax it down."

Even after Windy the Horse was put in mothballs, Mary Ann continued on several years longer with a spin-off show call Mary Antics, and then was seen on Channel 27's Christmas programs well into the 1970s.
Posted by JSH at 2:29 PM

Hello,
My wife was on this program when she was a kid. Unfortunately she did not get to see it when it was aired. I had a neat idea! I don't know?if these programs still exist filed away somewhere.I would like to have a copy made for her as a gift from me. This may not be possible,but if anyone knows how i
can obtain this information,I would be greatly appreciative for your help. THANK YOU Darren