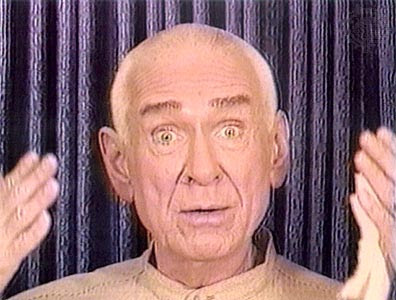 Remember the Heaven's Gate people? In 1997, thirty-nine members of this UFO-worshipping group committed mass suicide, dressed in black and wearing their hair in buzz cuts. They killed themselves off in shifts, using a combination death-trifecta of pills, alcohol and suffocation.

Their leader was Marshall Herff Applewhite, a former music professor from Texas. In the months leading up to their mass suicide, several Heaven's Gate members, including Applewhite himself, castrated themselves, in preparation for a spacecraft that was scheduled to pick up their souls after death and take them to a higher plane of existence. Seems to me that if you're a sentient disembodied soul, you're already on a higher plane of existence and don't need a spaceship, but hey, it's their religion, not mine.

But did you know that Applewhite had previously already made headlines in Kentucky - in 1973? From the Kentucky New Era newspaper, March 1, 2002:

It seems that Applewhite, before he became famous, and a companion -- presumably Bonnie Lu Nettles, the woman who introduced him to the world of metaphysical studies -- made a one-day pilgrimage to Hopkinsville on Oct. 9, 1973, to visit Edgar Cayce's grave at Riverside Cemetery.

While here, they checked into the old Holiday Inn on Fort Campbell Boulevard, now the Econo Lodge, where they managed to make a lasting impression.

At the time of the 1973 visit, there had been quite a bit of publicity about psychic David Bubar's claim that he received an "angel message" from Cayce, directing him to establish a mountain-top healing center near Hopkinsville.

Interestingly, news reports of the day indicated that Bubar, of Memphis, received his instructions from Cayce's spirit on Sept. 8 of that year while also staying at Hopkinsville's Holiday Inn.

Applewhite's visit to the community caught the attention of the late Joe Dorris, who wrote about it in his "Watching The Parade" column, published on Oct. 19, 1973.

Dorris' Applewhite column -- based on an interview with Chip Miles of the Holiday Inn -- had been saved all these years by Johnson, who stumbled across it and made the Heaven's Gate connection several months after the cult's 1997 mass suicide.

In the column, Miles recounted how a mysterious couple, without a car and no luggage, showed up at the Holiday Inn and asked for a room.

The man's driver's license identified him as M.H. Applewhite, 42, and he told the desk clerk that he and the woman were from Texas.

When a maid went to clean their room the next morning, she found the guests had vanished, skipping town without paying the $20 motel bill.

Left behind was a two-page note that suggested the man and woman were not from this world.

"Dear Sir: Thank you for permitting us accommodations in your inn. It would be impossible to explain to you who we are, where we come from, and who we represent. If we tried, you would not believe us.

"We exist in another dimension, which does not allow for the use of currency. We are on the planet for a few more months and our mission is for good.

"It would be useless for people to attempt to treat us as they would their own or to bring us harm, for it would result only in their death. This note is true and certainly not to be understood as threatening but as thanks for accommodations.

"This information should be kept in the strictest of confidence for your best interests. You will be rewarded well for your cooperation."

Miles, although out $20, had some fun with the odd encounter, according to Dorris' column.

On the Holiday Inn marquee, he changed the wording from the traditional "The Nation's Innkeeper" to "Innkeeper Of The Universe."

"It was probably worth the publicity we got out of it," Miles said, with a laugh, while recalling the incident after he was asked about it earlier this week.

Now, more than 28 years later, Miles said he still remembers the purported space travelers and the note they left for him.

However, Miles said he had forgotten that the stranger from the Lone Star state signed his name M.H. Applewhite on the motel's guest register. As a result, he never made the connection to the Heaven's Gate mass suicide when it occurred about 23½ years after the two Texans visited Hopkinsville.

"I'll be darned. I just never put all that together," Miles said.

About two years after seeing Hopkinsville, Applewhite and Nettles made national headlines when, claiming to be space aliens, they reportedly convinced a group of 20 people from Waldport, Ore., to leave their homes and move to Colorado to meet up with a space ship that was supposed to take them to a far-off planet.

Marshall Applegate does bear more than a passing resemblance to Kelly's Little Men.

What that street corner did to my brain cells.