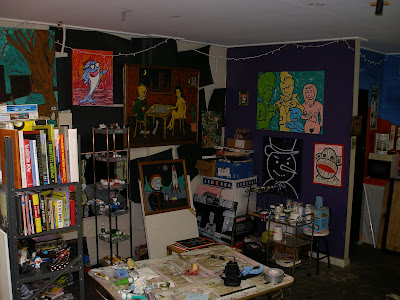 Hey, that's me! Well, it's my blog, so why not? I'm probably not the weirdest artist in Kentucky (though you might get a different answer if you asked some of my ex-girlfriends) but I do have a grip on a certain unique reality principle, as William S. Burroughs sort-of once said.

Originally I envisioned a whole chapter in Weird Kentucky on weird Kentucky artists, but it sadly got the cut in the final edits and was reduced to a mere page. Here's the expurgated talking-about-myself-in-third-person text from my entry in that material:

Weird Kentucky's own author, Jeffrey Scott Holland from Waco, KY, has sold thousands of his raw, primitive paintings and recorded thousands of equally primitive songs with his various musical projects. From his most recent artist statement:

"I work in a savage, post-neo-expressionist style that is often heavy with line and thick with impasto. For the patient observer, a gradual bigger picture of what I am doing may be formed by studying what I choose to paint and why. My work is about secrecy vs. openness, mystery vs. revelation, rural vs. urban, certainty vs. uncertainty, wave vs. particle. My work is not for the jaded, the ironic, the unenthusiastic, the terminally hip, the perpetually bored. I'm looking for people whose joie de vivre knows no boundaries."

Two years in a row, Holland has showered the nation with hidden green plastic Easter eggs with miniature artwork concealed inside. The majority of the eggs in Project Egg remain unfound, however, and are still out there waiting to be discovered. A third installment, intended to reach a global audience, has been cancelled because of Holland's increasing anti-plastics activism.

I am lovin' the Charley the Tuna in the background!

Hey! I bought my kid a sock monkey that looks like that painting!