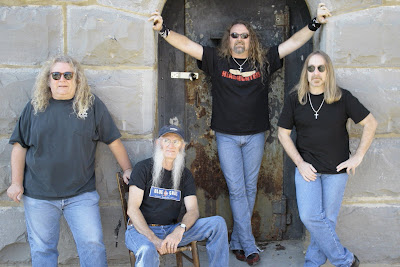 I've lamented more than once before about how the vast majority of ghost stories in William Lynwood Montell's book Haunted Houses and Family Ghosts of Kentucky don't contain much in the way of verifiable information. In most cases, the county is the only piece of identifying data we're given, which renders further attempts at research pretty much useless.

Don't get me wrong, the book is great if you're simply into "ghost stories" for their own sake. But I am not. My interest in paranormal phenomena is hands-on investigation, not the idle telling of tales that your hairdresser's granny swears happened to her mailman in 1956.

One of the stories in Montell's book that could potentially be followed up on, however, is one on page 87. It says that the Kentucky Headhunters had a rehearsal house in Metcalfe County that was - and is - haunted, though they continued to jam there and wrote many of their hit songs there. According to the book, "This old practice house became a very famous institution when the Headhunters won all their Academy Awards." 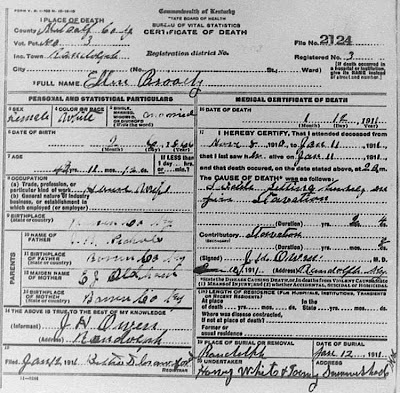 Names are rarely named in Montell's collected anecdotes, but this one specifically states that a woman named Ellen Broady was a victim of apparent Spontaneous Human Combustion, burning up to a crisp in the house but not burning the house itself at all. Sure enough, a Google search turned up a death certificate for an Ellen Broady who died in Metcalfe County, Kentucky on January 12, 1911. The doctor's handwriting is very hard to read, but it appears to say the cause of death was "Probably setting herself on fire."
Posted by JSH at 12:48 AM

First, they won a Grammy, not an Academy Award.

I've spent a lot of nights hanging out in the Practice House, myself and have heard strange screams coming from inside when we're out on the porch and seen things fly across the room without being thrown. I can't certify that it's haunted, but I can assure you- that house is the creepiest place I've been.

That bit about "all their Academy awards" was a quote from Montell's book, of course; twern't me talkin'. But Montell may have, in fact, been referring to awards the band won from the Academy of Country Music.