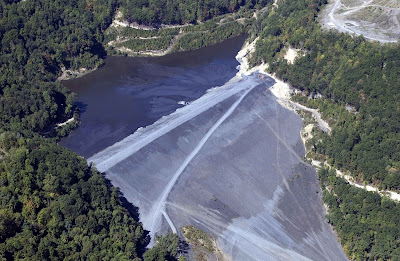 The Tennessee Valley Authority operates a coal-burning power plant located near Harriman, TN (along Interstate 40 between Knoxville and Nashville)

On December 22, 2008, an impoundment at the plant failed, releasing over a billion gallons of a disgusting coal-waste substance that officials dryly refer to as "coal fly ash slurry". Everyone else calls it "sludge".

The sludge covered up over 400 acres of the surrounding land up to six feet deep, destroying homes and flowing into nearby waterways such as the Emory River and Clinch River, tributaries of the Tennessee River. This ended up contaminating the water supply for millions of people living downstream in Alabama, Tennessee and, yes - Kentucky.

On December 30, 2008 a group of landowners filed suit against the TVA for $165 million in Tennessee state court. the Southern Alliance for Clean Energy announced its intention to sue the TVA under the federal Clean Water Act and the Resource Conservation and Recovery Act. Greenpeace has called for a criminal investigation into the preventable incident.

Although it didn't make the news headlines as much as the Harriman incident, a second TVA sludge spill disaster occurred on January 10, when the Widows Creek Fossil Plant in northeastern Alabama leaked toxic coal ash into the Tennessee River, once again threatening the water in some parts of Kentucky.

Kentucky's not without its own sludge floods - On October 11, 2000 a coal sludge impoundment owned by Massey Energy in Martin County gushed into a underground mine which subsequently sent an estimated 306 million gallons (1.16 billion liters) of sludge into tributaries of the Tug Fork River. This incident was investigated in the documentary film Sludge by Appalshop filmmaker Robert Salyer in 2005.