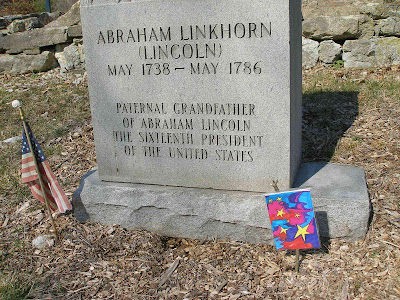 The grave of President Lincoln's paternal grandfather, Abraham Linkhorn, is just down the road a piece from me, in the great Long Run Cemetery.

The idiosyncratic spellings of the family surname can be a bit confusing. Many relatives of Abraham Lincoln chose to spell the name "Linkhorn" or "Linkhern", drifting from the Lincoln surname which originated in England and literally means "lake colony" (Welsh lynn meaning "lake or pool" and Latin colonia meaning "colony."

Reportedly, Mr. Linkhorn isn't actually buried under this stone. He was killed near this spot in 1786 by Shawnee indians, and buried somewhere in this cemetery, but no one's quite sure where now. This stone was erected many years later and arbitrarily placed.
Posted by JSH at 2:31 AM

The story goes that after Abraham Lincoln Sr. was shot and killed, an Indian grabbed Thomas with intent to kill him or drag him off. But Mordecai, his older brother, took up his father's gun and shot the Indian dead. That's the family tradition anyway, and Jim Holmberg at the Filson says he has little reason to doubt it.