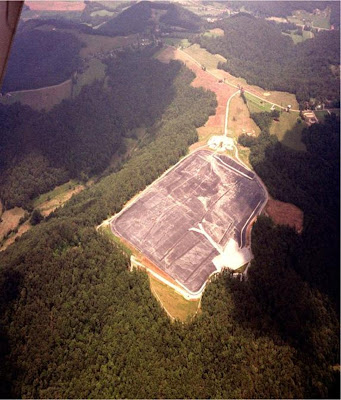 You did know that Kentucky has its very own nuclear waste dumpsite, right? The Maxey Flats Disposal Site opened near Hillsboro in 1963, and contains 4.7 million cubic feet of radioactive waste. Yum-O!

One would think that by the 1960s and 1970s people would have been wise to the ways of proper nuclear waste storage, if for no other reason than trial and error; not to mention just plain common sense. But believe it or not, dear readers, this was the original Maxey Flats disposal methodology:

3. Cover 'em up with some dirt and walk away.

Dumping at Maxey Flats finally ceased in 1977, after environmentalists discovered that this Fred Flintstone style of hazmat handling was causing an ecological nightmare in the area. But the existing mess is still there, and will be for thousands of years to come.

Water in local springs are routinely tested to monitor the radioactive waste level in the water, and we're assured that the public is fully protected against "unacceptable levels of contamination".

Now, if you ask me, I would say that there is no acceptable level of contamination. But they didn't ask me.