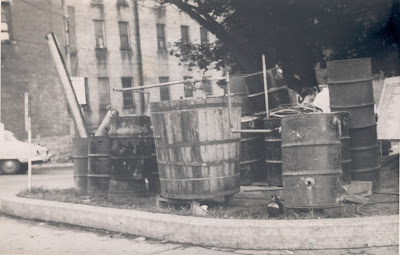 Moonshine, that other legendary Kentucky drink besides Bourbon, is a real Kentucky delicacy and not something that Al Capp just made up for “Li’l Abner.” I’m continually amazed at how many city-folk I encounter who thought moonshine was just a weird urban legend, or simply a colorful euphemism for whiskey.

Here’s how it’s made:

Assemble your ingredients: corn meal, sugar, water, yeast and malt. Freshly stone-ground corn meal is better than crap you find at the supermarket, and course raw cane sugars like turbinado are better than processed-to-death white sugar. For common folk-remedy “spring tonic” variants, you can add various herbs and roots such as ginseng and the psychoactive sassafras root. Some have even used wormwood or mugwort, making moonshine spring tonic truly the “Appalachian Absinthe.”

Combine the ingredients in a large container until thoroughly mixed. This is what is known as your “mash.”

Place the mash into a “Still” (home distillery) and turn on the heat to 175 degrees. The idea is to heat the mash to the vaporization point, and collect the steam vapors rising from it in the still’s copper tubing. This condensation then collects in a separate container, and this, my friend, is moonshine; the mystic elixir that Snuffy Smith called “corn squeezin’s,” the medicinal balm that Pogo Possum called “Aunt Granny’s Bitter Brittle Root,” the holy grail that Grandpa Jones called “Mountain Dew.” The soda pop of the same name, by the way, used to depict cartoon hillbillies on its bottles before the days of political correctness.

(The recipe I provided here is just for your information, mind you. Strictly for sake of argument. Just making conversation. Don’t actually do it. And if you do, research it online first and make sure you know how to build and operate a still. But don’t do that either.) 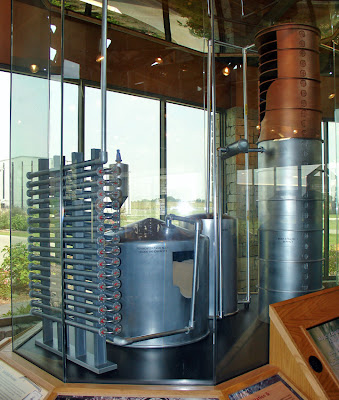 Poorly produced moonshine can not only be horrible to drink, it can also be toxic. A common practice back in the day was to pillage auto parts for assembling a still, such as the radiators and coils. Needless to say, this was unsafe and led to moonshine that contained traces of lead poisoning. This hazard obviously doesn’t apply to the majority of moonshine being produced, of course, but that didn’t stop the Government “Revenooer men” from exaggerating the risks in their anti-shine literature of the 40s and 50s. Even today, I found a current scare-site on the web that warns “About 80 percent of all adult lead poisoning deaths are related to moonshine consumption”. Personally, I find this claim to be ludicrous, since there’s obviously far more people exposed to lead paint and lead pipes still in public use out there in the world than there are moonshine drinkers.

The confusion with whiskey comes from the fact that Kentucky Bourbon is at least 51 percent corn-based rather than rye-based, and literary references to "corn liquor" might mean either Bourbon or Moonshine. Whiskey and bourbon have a different fermentation process, must be aged in special oak casks, and usually contain a blend of grains.

The most famous portrayal of moonshine in film was probably the 1958 film Thunder Road, in which the great Robert Mitchum played a bootlegger from Harlan County, Kentucky who drove a supercharged Ford with a secret compartment tank for transporting moonshine into Tennessee. The iconoclastic film, presenting Kentuckians flouting laws and eluding cops in high-speed car chases, was the grandfather of all Smokey and the Bandit -type films that followed. For better or for worse.

(top photo: confiscated moonshine stills in Breathitt County.)
Posted by JSH at 10:52 AM

You must have been reading my mind because right before checking out your blog today, I was looking up how to make moonshine!

If my memory has not failed me, the first distillation needs to be distilled again. The first is poisonous. I believe this was called singlins and doublins in the Foxfire book series, #5 I think.

Why would the first distillation be poisonous? It's just corn.

Actually, mho1970 is right - the more you distill it, the purer it is, and it's desirable to go past just the first distillation. The first drops that come out are called "Foreshots" and contain methanol, acetone, and other undesirable substances. Second distillation is not only safer, it's much more palatable.

I don't make the stuff myself, of course. The recipe given here on the blog was one I found on the web two summers ago while researching the book. I've long since forgotten from whence it came.

I had deliberately glossed over the finer details here because, as I said, I don't encourage anyone actually doing it, and certainly not based on information obtained from this blog.