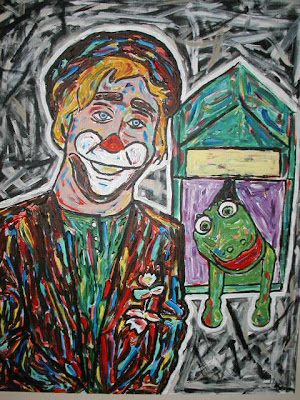 In a day and age where even obscure Lexington TV shows like Monsterpiece Theatre are on youtube and well documented online, you'd think there would be something about WTVQ's Happy's Hour on the web. But surprisingly, there doesn't seem to be.

In the late 1970s and early 80s, Happy's Hour was an extremely popular afternoon children's show that acted as a showcase for old Three Stooges and Flash Gordon episodes. Airing on Channel 62 (later 36) at 3:15 weekdays, it quickly became a hit with kids, not for the old black and white films but for the show's hosts: a hobo-clown named Happy and his frog puppet sidekick, Froggie, who would pop out of a window on the wall and say insulting things.

The show began to jump the shark when Happy and Froggie became the mascots for "Picture Pages", a local weekly newsprint giveaway full of "educational fun for kids", and then when an obese slovenly clown called "Happy #2" started to host the show more and more.

Somewhere I have a 45 RPM record of the Happy's Hour theme, and when I do find it, I will digitize it. Meanwhile, all I have handy is this photo of a painting of Happy and Froggie that appeared in my Desperate Telegrams one-man exhibition at Gallerie Soleil in the summer of 2003.
Posted by JSH at 12:28 AM

Thanks for posting this. It had been bothering me for a long time that I couldn't remember who that clown was. I had forgotten about Froggie, although I did remember him talking to a puppet came out of the wall which led to some confusion on my part when I was trying to look up this show and found info about another show in Lexington that had a talking horse puppet that would come out of the wall (that was prior to Mr. Ed). About the same time that Happy's Hour was on 27 had a competing show that aired programs like The Lone Ranger and Raw Hide.

Also, there was some crzy program that 18 would show in later years (not sure if it was a Lexington made show that had some kind of magical talking pony character on it that would lead children to various fairy type realms).

One more thing, in the 70's Lexington had its own Romper Room tv show, and I someone told me that certain business men used to enjoy watching it because the hostess was quite attractive.

I decided to do some digging because I didn't want folks to think the Pony program that I was talking about was My Little Pony or something. From what I've been able to dig up, it seems that the pony program was a nationally syndicated show or just a program on NBC. WLEX played it in Lexington. I belive it was called Tony the Pony.

I haven't been able to find any images or video of it, but as I remembered it showed a real pony at the beginning, but it the show the character of the Pony was played by some kind of puppet or a couple of guys in a mascot uniform. It was a very trippy show more like a children's show that I would expect on Japanese rather than American tv.

Plot Summary: "The story of Tony, a magic pony who can grant children any wish. "The Book of Magic" declared that a colt named Tony be endowed with magical powers and be given to Jonathan, a lonely boy. The series depicts their adventures as they help children in need."

Review from a 35 year old Yahoo user: "My Favorite Show When I Was a Kid. Today, I'm a 35 year old father of three kids. Back in the 70's, I used to LIVE for this show to come on TV. Loved it--was something I'd drop EVERYthing for an come running, as soon as it came on... I'd love to find it on DVD somewhere! Please post if anyone has any knowledge about a DVD or video release.

Link to information about the show on TV Obscurities:
http://www.tvobscurities.com/category/television-shows/tony-the-pony/

And the talking horse (prior to Mr. Ed) puppet that came out of the hole or stable window in the wall much as Froggie did in later years, was Windy Wonderful on WKYT beginning in 1959.