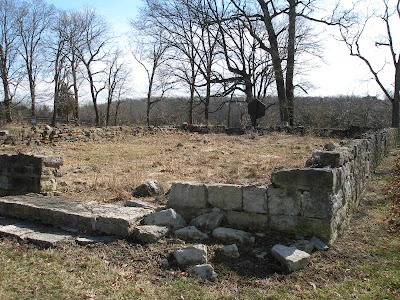 The church's remains can be seen clearly on Google Maps here.

This area was the site of the "Long Run Massacre", described by the historical marker sign as "undoubtedly the bloodiest in Kentucky". Huron and Miami indians killed 76 settlers and soldiers during a two-day period. Those killed on the first day were en route from Squire Boone's Painted Station to the Falls of the Ohio, and those killed on the second day were militiamen dispatched to bury the victims from the previous day.
Posted by JSH at 11:54 PM