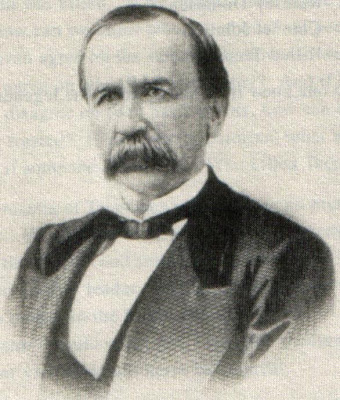 Like James Harrod, former Kentucky State Treasurer James "Honest Dick" Tate is another prominent Kentuckian who pulled a permanent vanishing act. But at least we know Tate's motive: he cleaned out the state's coffers he was entrusted to protect. After bilking Kentucky out of nearly a quarter of a million dollars, he fled and was never apprehended.

On March 14, 1888, Tate was seen filling two huge tobacco sacks with $100,000 in gold and silver coin. He departed for Louisville, instructing his staff via a note that he would return in two days. He never did.

During the subsequent investigation, it was learned that Tate had been using the state Treasury as his own personal piggy-bank for quite some time, having used the funds to pay his own debts and to make investments in real estate and mining ventures. All total, Tate had swindled the state out of $247,128.50.

It was later determined that Tate had gone to Cincinnati after leaving Louisville, and from there apparently traveled to Canada, San Francisco, Japan and China, according to the postmarks on letters he wrote his daughter while on the run. The letters stopped coming in December 1888, and what became of Tate after that is anyone's guess.
Posted by JSH at 10:27 AM

Strange, I wrote about this about a week after you did at the blog I'm writing on historical political scandals (http://downfalldictionary.blogspot.com). The last I found on him was an 1897 New York Times article suggesting he was in Brazil planting coffee.

The Wikipedia article says he absconded with the entire state treasury, but I think that's an overstatement. Anything you've found on that end?