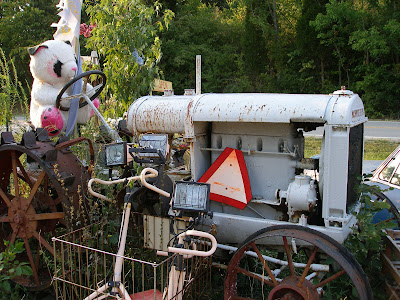 So it's late Summer 2007 and I'm way past deadline on the final draft of the Weird Kentucky manuscript and the editor still wants more material to choose from. I'm drivin' eastbound on Highway 60, thinking about heading to Frankfort to grab me some grub at the White Light Diner.

And then I screeched on the brakes and realized that one of Kentucky's greatest sights had not yet been written about in my book.

No, not the Red River Gorge, not Cumberland Gap, not Wigwam Village or even Penile. 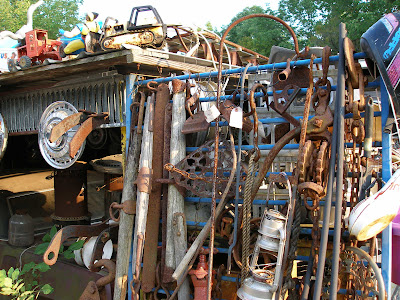 It's an antiques emporium, flea market, or just plain junk store, depending on your choice of nomenclature. It could also be described as a public art installation similar to that of the Frankfort Avenue Art House (which is on the same road, but many miles away in a different county). 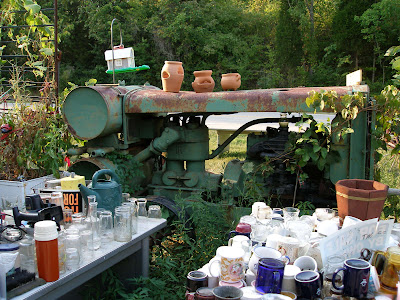 As I wrote feverishly in the book:

Taken individually, many of the items on open-air display out front may or may not dazzle you. But taken as a whole, each bit of bric-a-brac has a synergetic effect and forms a part of an exquisite mosaic, making this no ordinary flea market but rather, a cathedral of discarded Americana, a shrine to the human condition and all its follies and foibles.

It's also like a Rorschach test of aesthetic aptitude - just as William Blake said "The fool sees not the same tree the wise man sees", not everyone sees the same thing when they gaze at this secondary-market museum of Earthly effluvia that this elusive "Smitty" has nobly archived for the inspection of us all.

(And to think you thought it was just a yardful of rained-on furniture, rusty farm implements and fast food kids meal toys!) 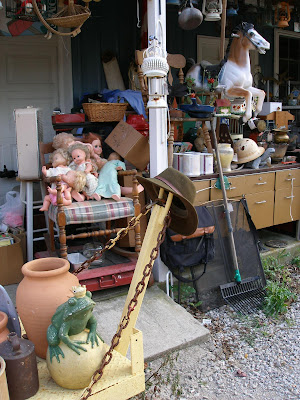 It's over a year later, and half a year since the book has hit store shelves nationwide, and I still haven't been able to catch Mr. Smitty open for business so's I can hand him a copy of the book and proudly show him my personal tribute to his magnificent collection of crap. Apparently catching Smitty keeping business hours is something of a challenge. I didn't realize it at the time I wrote the book, but Smitty's Trading Post had already made an appearance in Blue Highways by William Least Heat Moon:

I came to a ramshackle place called Smitty's Trading Post. Smitty was a merchant of relics. He could sell you a Frankfort, Kentucky, city bus that made its last run down Shively Street, or an ice cream wagon made from a golf can, or a used bulldozer, or a bent horseshoe. I stopped to look. Lying flat as the ground, a piebald mongrel too tired to lift its head gave a one-eyed stare. I pulled on the locked door, peered through windows grimed like coalminers' goggles, but I couldn't find Smitty. A pickup rattled in. A man with a wen above his eye said, "Smitty ain't here."
"Where is he?" I was just making talk.
"You the feller wantin' the harness?"
"Already got one."
"What'd you come for then?"
"I don't know. Have to talk to Smitty to find out."
"That's one I ain't heard," he said. 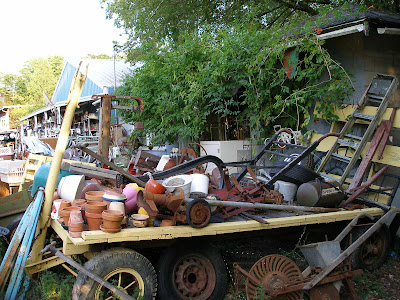 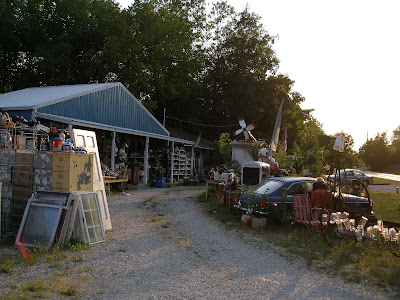