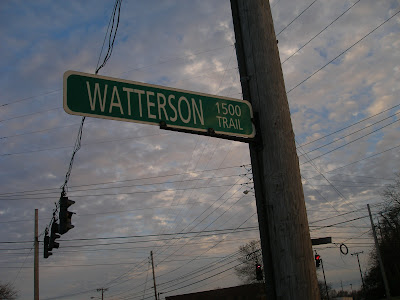 Something that never fails to fascinate me is that many of our existing paved roads today began as ancient traditional trails and pathways, blazed by animals as they stomped the same path into the forests year after year. These natural pathways were already etched into the wilderness by the buffalo long before humans set foot on this soil.

Watterson Trail is one such ancient animal-created road. When people drive on it, they don't stop to consider that this road was meant to be a road, long before even the tribes we call Native Americans were here. (Well, I think about it all the time, of course, but I'm a freak.)

It stretches from the Middletown district of Louisville to Jeffersontown, and isn't much to look at, but for some inexplicable sppoky reason I find it one of my favorite roads, one I'm often drawn to against my will. I was surprised to find that Google Maps has it available in their "street view" mode!
Posted by JSH at 12:25 AM