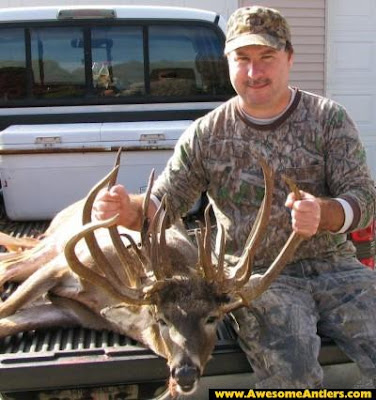 We're currently in a peculiar moment in history: even though wildlife populations are dwindling more than ever, we're actually far more likely to encounter them now than we were twenty years ago. The reason for this is because the privacy of their natural habitat is increasingly encroached upon by civilization.

Case in point: just a few years ago I was walking through a small semi-wooded area being cleared for a forthcoming subdivision. A lot of bulldozers and hammering going on, so definitely the last place I'd expect to see deer.

As I walked down a recently paved road, an impossibly enormous elk jumped out of the shrubbery to my right and charged straight for me. All my life, it's always been deer running from me, not straight at me! Its antlers were a huge, crazy, multi-tined, asymmetrical mess, and its eyes were like evil black soulless marbles. I moved out of the deer's path and fortunately, it kept on charging along its prescribed path, crashing through the shrubbery on the other side of the road.

And then it was gone.

When I used to have an art studio in Richmond, my neighbor was an old-timer hunter who ran an army-surplus store. I recounted the incident to him, and his eyes widened. "You know whatchoo saw??" he exclaimed. "Son, you done saw the DEVIL DEER! Do you know how many hunters would give their left NUT to see the Devil Deer?"

Prodded to elaborate further, he told me "all serious big-time hunters know about Devil Deer, and that they're the most dangerous thing in all the wilderness. They're bigger, meaner and crazier than regular deer, and they cain't be killed!"

What I don't know about the world of hunting, you can almost fit into the Hollywood Bowl. So, I remain unsure if this guy was either crazy or just pulling my leg with some sort of "Great Pumpkin" story for drunk outdoorsmen.

What I do know, however, is that Kentucky is quite popular among hunters for non-typical deer specimens. And this message board post alludes to a 200-inch buck shot in Fredonia in Caldwell County.

And then there are certain ancient legends, carried across the great pond to our fair continent by Europeans but finding a suitable growth culture in our dark and bloody ground. Legends of hunters witnessing magical and frightening deer, the likes of which never beheld before, which lure the hunter to strange and unfamiliar parts of the woods. The evil ghostly deer then disappears like an apparition, leaving the unfortunate hunter completely and hopelessly lost in terra incognita. 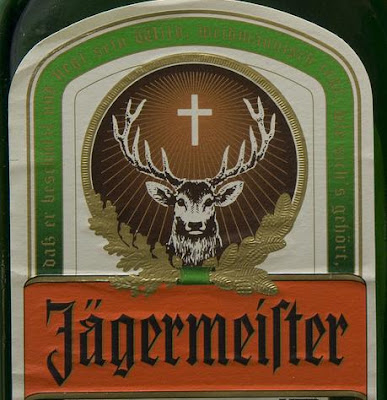 Then there's the Catholic Saint Hubert, who became the patron saint of hunters. As the story goes, Hubert was a reckless and thoughtless hunter, until one day he was visited by a majestic talking stag with a glowing crucifix floating above his head. The talking stag warned Hubert he was doomed to Hell, so Hubert turned to Christianity, resolved to spend the rest of his days doing good works, and became a Saint. The eerie, mystical-looking stag that has adorned bottles of Jagermeister since 1934 is that same creature that confronted St. Hubert.

The cross-stag may seemingly be playing for the opposite team of the Devil Deer, but it sure as heck looks scary!
Posted by JSH at 12:04 AM