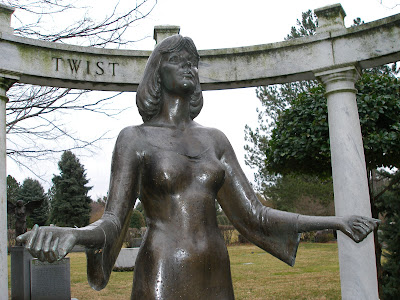 Saundra Curry Twist's grave in Louisville's Cave Hill Cemetery has probably the most eye-catching of all the many beautiful statues there. Twist, a professional fashion model, was killed in an automobile accident in 1981, and her grave marker depicts her larger than life, with arms outstretched and a marble colonnade behind her. The inscription at her feet reads "God Always Seems to Pick his Prettiest Flower".

In 2000, Saundra's daughter Tonjua Twist committed suicide in her apartment in Marina Del Rey, California. Tonjua was a Hollywood fashion stylist who worked with many stars such as Cindy Crawford and Michael Jackson. The still-current trend of low-cut jeans was single-handedly started by Tonjua when she removed the waistband from a pair of Mariah Carey's jeans for a photo shoot in 1999. According to US Weekly, Tonjua swallowed more than 70 tranqulizers, antidepressants and sleeping pills.
Posted by JSH at 1:01 AM

Thank you for this post. I was Googling Cave Hill Cemetery when I ran across your blog. I think this cemetery is my all-time favorite---right up there with Hollywood cemetery in Richmond, VA.

My favorite poet, Madison Cawein (AKA "The Keats of Kentucky"), is also buried at Cave Hill. He died in 1914 and is buried under a small stone in a pastoral section of the cemetery.

Of course, the Saundra Twist marker is one of a kind and unforgettable.