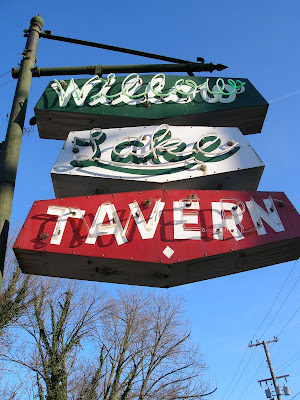 Willow Lake Tavern has existed for decaded near the corner of Lakeland and LaGrange in Anchorage, is on property formerly near the Central State Asylum's 19th century grounds, and not surprisingly, has been the source of many hauntings, sightings, and ethereal disturbances.

I dropped into the place last summer while researching the Weird Kentucky book. I tossed back a few brews and grilled the locals about whether they'd seen anything spooky around the joint. One patron of the bar, without my prompting, even went so far as to compare it to Bobby Mackey's, and noted: "I never believed in ghosts until I moved to Kentucky".

In its early years, the asylum operated a trolley car on its own private railroad tracks that existed where Lakeland Road sits today (you can still see the paved-over railroad ties peeking out from under the asphalt in some places). The Willow Lake Tavern's location back then was on the border of the Huston and Whipps farms. This is quite near where the "switching yard" would have been, for transferring the patients being shuttled in on their bleak journey from the incoming train car on the main tracks.

Recently the Willow Lake Tavern has become Selena's Restaurant but thankfully, the new owners have left the old neon sign intact. The mood there is considerably more upscale and the food is great, check 'em out!
Posted by JSH at 11:50 AM