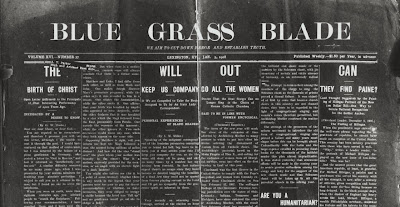 One of America's earliest "radical" freethinking weekly newspapers, The Bluegrass Blade, was published in Lexington, KY from 1884 to 1910. Its editor, Charles Chilton Moore, presented his paper as an atheist alternative to other local Kentucky papers that were, in his view, tainted by religion.

Although Moore's paper promoted civil rights and other liberal causes, he also came down on the side of conservatives when it came to alcohol prohibition, which he supported.

Apparently another case where 'freedom of religion' really means....'you have to have religion or be religious to live in this country'. Well...they did say it was 'one nation under God'.

My mom was watching one of those stuffy Keira Knightly movies and noticed she has sweat stains on her armpits. She said that women weren't allowed to show their arms back in those days. To which I declared, 'now women have the right to bear arms'...I thought it was funny.

I thought about getting BluegrassBlade.com but upon further review someone has taken up the banner with Bluegrassblade.org.