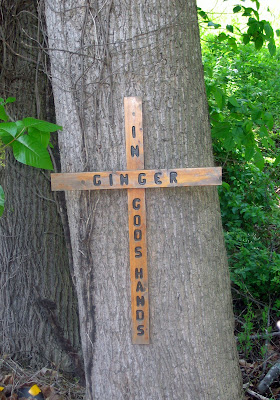 The tradition of erecting a roadside memorial marker began in the South (and Kentucky was one of the first) but has gradually spread nationwide during the second half of the twentieth century.

It’s increasingly common for grieving friends and relatives to place some sort of marker by the side of the road near where a loved one died in an automobile accident. Problem is, there are a lot of automobile accidents in the world. And the markers start to accumulate. Some particularly bad stretches of road are so dotted with these sad crosses that they’re perpetuating the dangerousness of the location: I don’t know for a fact that anyone has died yet because their attention was diverted from a bad curve while checking out all the roadside memorials, but I’d lay money on the odds that it’s happened.

Some cities, towns and counties have even gone to war with citizens over these crosses. They’re becoming a public nuisance and an eyesore, say some. Although it certainly seems fair to allow a grace period for such memorials, they obviously can’t stay there forever, can they? Many families insist that yes, they must - and stake their claim on these spots in perpetuity. It’s a problem for many police officers or roadside cleanup crewmembers who can’t bring themselves to take them down, even when ordered to do so. And what do you do with them then - just throw them away? To many, this would be tantamount to grave desecration, even though no one’s actually buried there.

While researching the Weird Kentucky book, I spoke to one Calloway County woman who explained to me why her daughter’s roadside memorial is so important to her, even more so than her grave: it’s the last place her daughter was alive.

Although ghosts, spirits, the paranormal, an afterlife, and other such topics weren’t directly mentioned, it was clear that the location where her daughter last existed is far more important and powerful than the location where her body was buried. Whether people actually think this out in detail, the inference seems to be that there’s a greater likelihood of someone’s spirit dwelling near the place of their tragic death, than their burial site. Instictively, we as a species seem to just subliminally know that we are not our bodies.

It may seem grisly and macabre to obsess on these primitively constructed private-yet-public memorials to tragic deaths, but no more so than tombstone enthusiasts, one would think. Are roadside memorials not a pure form of folk art? Regardless of how one rationalizes one’s interest, these memorials are quite fascinating and speak a lot more about the human condition than any cemetery.
Posted by JSH at 1:02 AM

What about the window decals people have made for their cars when a loved one dies? Usually something like "In Memory of ..." commonly seen on the backs of trucks and Camaros.