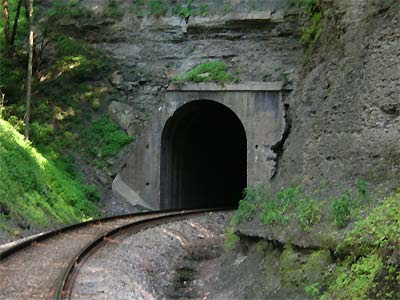 According to the Southeastern Kentucky Paranormal Society, this "Tunnel Hill" in rural Napfor, KY is something worth checking into.

Although the SKPS indulges in the sort of primitive "ghostbusting equipment" that I disdain - EMF gaussmeters and such - they have done a fair amount of puttering around the place, and gone to great lengths to try to find something, anything to show evidence for the claims that Tunnel Hill is (and I quote) "a terrifyingly active location". According to their site:

We investigated both tunnels, recording both video and audio, and taking still photos as well as temperature and EMF readings. There were no temperature or EMF fluctuations to speak of, and nothing unusual appeared either to the naked eye or on video. Digital still photos contained some shapes that some investigators would claim were "orbs," but are most probably dust particles lit by the camera's flash bulb...

Overall, we had no first-hand experiences that would indicate any real haunting. That's not to say there isn't any activity at Tunnel Hill - it simply means were unable to substantiate any claims during our investigation on that particular day, other than the two EVPs."

Well, at least they don't believe in "Orbs", thank goodness for that. But... EVPs? That would be "Electronic Voice Phenomena", which is the ignoble art of turning on a tape recorder in an allegedly haunted place and then swearing you hear ghostly voices on the tape. With all due respect to my colleagues at SKPS, I think EVPs are a truckload of old baloney. But you can check out their mp3 files of alleged ghost voices at Tunnel Hill and elsewhere, here.

"Tunnel Hill is located a couple of miles in the back roads of Napfor just before you get to low water bridge. Directly on top of the twin tunnels lie two cemeteries. But forget about the cemeteries for the tunnels are the sites of many bizarre occurrences. The story has it that there is a hidden chamber hidden among the manholes. It is said that the manhole will give way to the secret passage and those who have ventured into this passage have no recollection of how they got there. When walking through the tunnels all light sources will slowly drain and the further you venture into the tunnel total darkness. It is then that random light sources will appear from cracks and crevices on various places in the tunnel. Rather you go in the day or night the same will happen because most occurrences happen once you reach the middle of the tunnel. The right tunnel is much more active than the left. NEVER go alone. Beware these tunnels are still in service and actual trains still pass through each day. One such aspect of the haunting place is the ghost train, which you will actually hear and even feel beneath your feet. Faint train horns echo throughout this terrifying area. Also feel free to explore the large active cemeteries above. Rumors are there many more horrifying things that have happened and continue to happen that cannot be mentioned in this article."

Let's read that last sentence again, shall we?

"Rumors are there many more horrifying things that have happened and continue to happen that cannot be mentioned in this article."

Wow, they can't be mentioned! Even though they just did, sorta.... but they're only rumors.... but they can't tell us what the rumors are, exactly...... alrighty then!

So enough internet B.S., what's up with the real Tunnel Hill? Well, that's what I'm trying to figure out now. I've contacted a few people who live relatively near the area, and some say they've never heard a peep about the place being haunted. A couple of others indicated they're heard the rumors but know of no actual incidents. Is the whole thing just another legend that came about because railroad tunnels are dark and spooky and humans can't help making up stories?

Or maybe not. Maybe there is a kernel of truth inside. Very old railroad tunnels such as this do tend to be places of death, because of the inevitable accidents that occur - ironically, they tend to increase when a "ghost story" becomes attached to a site and more and more goofs start going there to gawk.

I'll be one of those goofs myself come Spring, and will file a full report, dear readers. I don't think I'll be making it out there to Perry County during the winter. Meanwhile, if you live around the Napfor area, please get in touch and tell me if you know any other info about Tunnel Hill.

I have heard people say that live around the tunnels that they were built by slaves, and when the slaves would die they just mortered them into the walls of the tunnel. Als0 of how a woman one day was picking lost coal up along the tracks, and was inside the tunnel, and could not see. Then when she got outside she looked at the coal she had gathered, and amoungest it was a decapitated head. Whether these are true or not, I do not know.