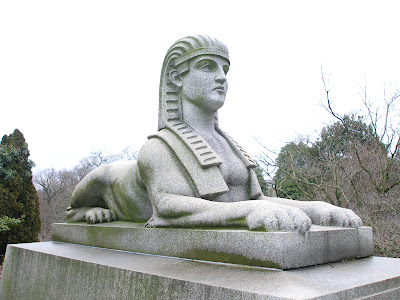 Mayor Farnsley's much more modest grave can be seen here.
Posted by JSH at 3:55 PM

Hi - I just came across your link here to my too long-neglected Wordpress blog about my family.

The link to Charles Rowland Peaslee Harbeson 1910-1912, shows a picture of his first cousin, my grandmother's first child. Mayor Farnsley's mother and my grandmother were the Peaslee sisters who sold the summer home to put up the Sphinx monument on their father's grave.

I am trying to figure out who the Mayor's mother was?

Zann, based on the information from your page, your mother was George-Anna Harbeson. Which makes your grandmother Ella Harper Harbeson Peaslee. Was her sister Anna May Peaslee?