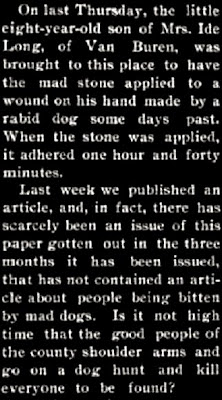 February 19, 1903, in the brittle and decaying pages of an obscure Lawrenceburg newspaper called simply It:

On last Thursday, the little eight-year-old son of Mrs Ide Long of Van Buren, was brought to this place to have the mad stone applied to a wound on his hand made by a rabid dog some days past. When the stone was applied, it adhered one hour and forty minutes.

I'd never heard of such a thing, but as it turns out the Mad Stone was a peculiar quasi-medical superstition of the day. According to an essay by Dennis Muncrief:

The Mad Stone is a stony concretion (as a hair ball) taken from the stomach of a deer. They have been described as round or oval in shape with a porous surface texture measuring about 3 to 4 inches in size and very light weight. They have a brownish-green color with a highly polished surface. The purpose of the Mad Stone was to cure rabies, hence the name.

The Mad Stone is an object that has several grades of curative power. All stones are not created equal. A stone from a brown deer will work in a bind if another cannot be found. A better grade of Mad Stone comes from a white or spotted deer. This stone works a lot better than a stone from a brown deer. The very best Mad Stone comes from an albino or "witch deer" that is pure white with pink eyes. It not only cures the rabies, it also cures rattlesnake and spider bites.

The use of the Mad Stone is quite strict. The procedure for curing the infected patient is as follows. When the person with the bite arrives at the place where the Mad Stone is kept, the stone is boiled in sweet milk. The sweet milk neutralizes the poison from the bite. The stone must be boiled in the milk until the milk turns green. That is how you can tell when all the rabies is out of the stone.

Thankfully these aren't standard issue in Kentucky doctor's offices anymore. (They're not, right?)

And just a day after discussing the "Devil Deer", now we get references to "Witch Deer"? The plot thickens, like an Appalachian forest.
Posted by JSH at 12:03 AM

Hey, all these 'deer' stories...just in time for Christmas! I just wonder what a 'mad stone' form a 'devil deer' would supposedly do for you, though. Maybe it can cure lunacy? I sure could use one of those...

I am a living heir of the Armstrong family of Winston County, Haleyville, Alabama and I have actually held IN HAND the mad stone that has been in our family for years.....My mother was an actual witness of the great works of this stone....as she saw it used numerous times during her childhood....Actually it was believed that back then, there were only 2 known stones (1 from a White Albino Deers Head and 1 from a Mineral Spring)......My mother told me of these stories about the use of this stone during my childhood!