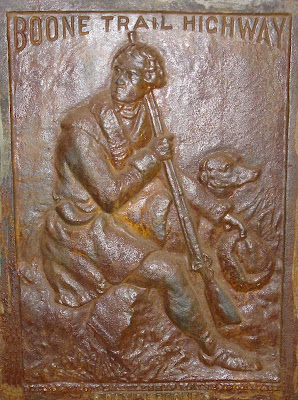 Ever seen any of these metal plaques?

In 1913, a North Carolina man named J. Hampton Rich made it his self-declared mission to spread the word of Daniel Boone's achievements and help keep his memory alive.

Now, there are many ways one could go about this, but Mr. Rich chose a somewhat odd method: he simply started dotting America's landscape with randomly placed plaques that read "Boone Trail Highway". According to Wikipedia, "Although many of the tablets are associated with locations visited by Boone, many were simply placed wherever Mr. Rich could collect the necessary donations from schools, communities, etc. to erect a monument."

Adding another twist to the already eccentric project: the plaques were supposedly constructed from metal salvaged from the battleship USS Maine, which was sunk during the Spanish-American War in 1898. There were at least 358 of these metal tablets placed around the nation between 1913 and 1938, but many have been lost to construction and carelessness.

I'm not certain how many of the plaques are in Kentucky, but two of them are in Berea.
Posted by JSH at 11:44 PM

There are 50 surviving such Boone markers across America including Frankfort, Louisville, Danville, Richmond & Ft. Boonesborough in KY. I am curious about the pic on your post: it is NOT one of the tablets in Berea.

Yep, it's a non-Kentucky one, I forget where from.