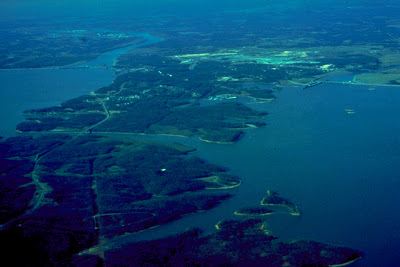 Lake Barkley and Kentucky Lake are enormous twin lakes side by side, with the territory between them known as “Land Between the Lakes.” I’m not even sure why they’re given separate names when they’re really one huge lake connected by a canal, but there it is.

The lakes are man-made, created in 1966 as part of a controversial TVA plan to evacuate entire towns and flood the area. Kentucky citizens were forced out of their homes and their property seized under “eminent domain.” To this day you can still don scuba gear and go down and see the remains of buildings, railroad tracks, streets, etc. underwater. They’re also visible from low flying planes, and possibly Google Maps.

The Army Corps of Engineers was instructed to dig up all the graves in all the cemeteries - a stagerring number of corpses and coffins - and transplant them elsewhere. There’s been quite a bit of speculation about whether or not things were done by the book. Cemeteries were not always transferred intact, and families that had originally been buried together in one cemetery were often needlessly split up across four others when moved. Some headstones didn’t even make it to their new location, and some have said that the likelihood is high that headstones were often mismatched with their proper owners out of carelessness or just trying to get a very unpleasant job done in a hurry.

Many graves in those old cemeteries had no stone at all, especially those of babies, slaves, and paupers. We know from old cemetery records that the people were interred there, but we don’t know exactly where they were - and neither did the Army Corps of Engineers. There’s no telling how many graves were left behind to be submerged forever under hundreds of feet of water.

Given this, it’s not much of a stretch to theorize the existence of ghosts in the vicinity who are extremely displeased about what happened to their homes, their relatives, their headstones, their graves.
Posted by JSH at 6:24 PM

I have family members that were "Moved" from the flood plain soon to be Lake Barkley. My mother and I have found some of the "relocated" cemeteries. One cemetery that was "moved" actually has no way of ever being flooded until Noah comes by with the Ark.