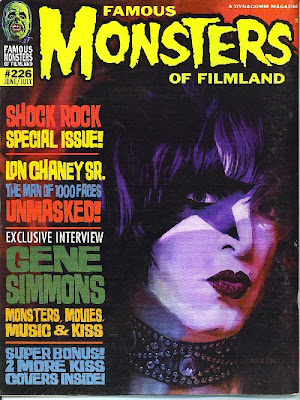 It's not really Kentucky-related but I think a significant share of my readers can dig it: recently the great Forrest J Ackerman left this world at the age of 92.

Forry was best known as editor/publisher of the century-defining Famous Monsters of Filmland magazine during its heyday 50s to the 80s, but also for his "Ackermansion" which drew tourists daily to view his staggering collection of pop culture memorabilia accrued over a lifetime. (In later years, he had to sell off much of the archive and move into a smaller "Acker-mini-mansion", which I wasn't aware of until reading his obituaries. Sad.) He also was an accomplished writer, as well as a literary agent for many cutting-edge writers like A.E. Van Vogt, Ray Bradbury, L. Ron Hubbard, Charles Beaumont, Marion Zimmer Bradley and even Ed Wood.

I met Forry at an Atlanta Fantasy Fair in the early 80s and we corresponded for awhile by mail for a zine project that never came to fruition. Even then, in my youth and thinking of him then as "old", I was amazed at his energy and enthusiasm. And now, years later, reading his obituaries, I'm impressed that at the age of 92, he was still managing his own MySpace page by himself.

I just last night saw Forry appear as a "talking head" in a recent sci-fi related documentary, and it warmed my heart that he was still kicking, still out there testifying. Ah well, alas, we're all here to go.