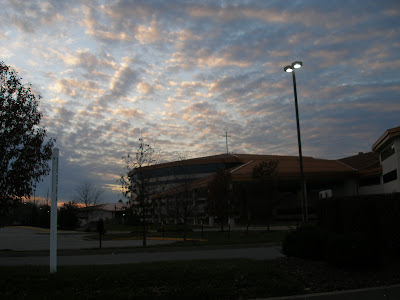 To use the term "Megachurch" to describe Louisville's Southeast Christian Church would be a great understatement. With five enormous buildings on a campus-like plot, their own newspaper, and a weekly attendance of 18,000 people, it's no wonder that Southeast Christian is the 6th largest church in the United States.

The church is often under fire for one reason or another, whether it's gaffes like a pastor's assertion that the 9-11 attacks were "proof of Christianity's superiority", or simple local complaints about the maddening traffic snarls caused by their events. Some have sued over allegations of harassment and assault and attacks by the off-duty cops the church employs as security and traffic directors. Others have merely voiced anger at the church's tactics and their alleged connections to the creepy dominionist movement.

The church has also been attacked by rival pastors and preachers, who charge that Southern Christian's message, style and presentation is far too slick, commercial, and easy-going. Apparently they're just not "fire and brimstone" enough for some people. Many sourpusses don't approve of the spectacular stage shows put on by the church, which are often heavier on music and entertainment than preaching gospel.

Personally, for what it is, I find their glitzy, commercialized approach much more refreshing and far less offensive than the typical dry old "turn to Leviticus and I'll tell you why you're going to hell" routine. (As I type this, the lead blurb on their website announces that "American Idol" finalist Mandisa will be performing there soon.)

I also have to have a certain amount of respect for something that started so small (a tiny building in Hikes Point) and quickly snowballed into something so astonishingly huge. In principle anyway, I tend to support and salute any enterprise that's so audaciously ambitious, even if I don't fully agree with their product. (Especially when it's tax-free.) Like many churches, Southeast Christian does plenty of charitable and beneficial work, such as their current toy drive for children. But unlike most churches, they have the size and added clout to really achieve these goals on a big scale. 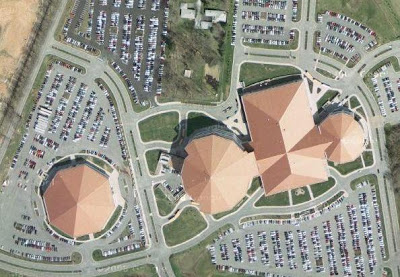 The Church complex is especially purty to view from above on Google Maps, as seen above.
Posted by JSH at 12:51 AM