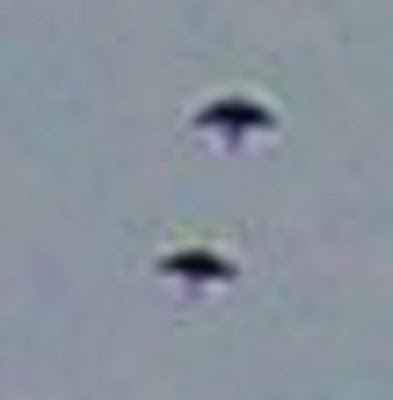 In September, MUFON had a report about a gentleman in Bowling Green claiming that fleets of UFOs were flying about his barn and had been doing so regularly since June. According to the report:

"I am a MUFON Section Director and a Certified Field Investigator. It was Friday the 5 of Sept at about 12 noon when I receive a Phone call at my home from a gentleman which will remain unnamed at this time.

He was speaking fast and seem very excited He told me that he had talked to a person in TX that gave him my name and told him about the MUFON website. He said I have photos of hundreds of Ufo's that he has taken over his house and barn since July of 2008, Some of fleets and some of vehicles every large and wide. He said he has seen some with his eye and some only after taking a photo of the sky do they appear in the photo. He thinks there in the gamma or something. He has shown them to his neighbors and he told me they freak out. He called the State Police which came to his house and they told him they had never seen anything like this before, and also mentioned to him about contacting MUFON.

Now, he would like MUFON to come investigate and see his Photo evidence collection. Before something happens to them. He wanted me to come right away, that night if possible. I told him I would come but not tonight. I wanted to bring others with me to investigate he's claims and that I would call him back with a date and time. He said that would be fine. So I called the KY MUFON State Director and left him a message. The State Director called me back later that afternoon. While I was talking with the State Director about this case, The guy calls me back, I put the State Director on hold and talk to the guy. He says Listen to me I have just taken a picture with about 50 UFO in it flying over my home. He was very excited and told me listen do you have a digital camera. I said yes, He said run out right now and take a photo of the sky looking north toward Louisville. There coming your way, you won’t see anything with your eyes but take a photo anyway, I said ok, He said I mean it, I’m not crazy. Do it so you can see I’m telling the truth. I hung up with him and went back to the State Director who was still holding. I told the State Director what the guy had said to me. And we both thought I should go out and do what he asked. So,I put the State Director on hold again went outside with the camera in tow to my back yard, looking northwest toward Louisville the sky was totally grey and overcast. I didn’t see anything with my eyes but, I took a picture as instructed and went back inside to talk to the State Director, I took out the SD card from the camera and put it into the my computer then said Holly Sh*t, Still on the phone with the State Director He asked me to email the photo to him. I waited on the phone till he received it. Then the State Director looked at and had the same comment I did, the State Director counted 53 Ufo a fleet as he called it.
Boy, Now to say the least, this was not turning out to be your typical average day for a Section Director and a State Director here in KY MUFON.

I live in Bowling Green, KY which is South Of Louisville. Since I didn’t see these with my naked eye. I can’t tell you the Direction they where moving, But since he told me they were heading my way which is south of him and he does live near Louisville. So I would say they were moving southward toward me and the camera, Please note as you look at each object all are exactly straight up and down that is odd to me. Also odd to me is the fact he told me he saw about 50 in his picture and oddly we counted 53 in the one I took. As I said there was nothing in the sky when I took this picture and I heard no sounds and it wasn't raining. And If these were geese or birds I would have seen them with my naked eye and not taken the photo. I would have watch there flight path 1st to determine what they where. Also there were no Nat's flying around me at the time either. I took this photo with a Kodak Easyshare C643 - 6.1 megapixel With a Kodak AF 3X Optical Aspheric lens 36mm – 108mm (equivalent) it has an automatic lens cover and the lens was clean. and I was looking at the screen when I took the photo and didn't see anything but the overcast grey sky. The only thing I wish, was that there would have been an other object in the photo like a tree or something for size and depth, But I didn't do that just shot the open grey overcast sky.

We are currently playing phone tag with the gentleman that contacted me. So I have not seen the picture he took the same day before he called me as of yet. The KY MUFON State Director is also currently coordinating other KY MUFON Field Investigators to investigate his other claims and accompany us to his home to interview him and see his other photographs."

The above is a direct cut and paste - all misspellings, typos, and sentences that make no sense whatsoever are from the original MUFON source. 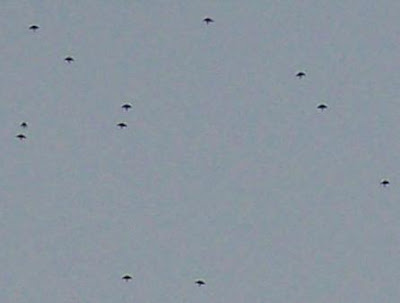 Photos of these alleged aliens are here. Seems to me that these UFOs look an awful lot like birds or bats, and no one has given any good reason why we should not think that they are.
Posted by JSH at 8:38 AM

Those are totally birds! LOL