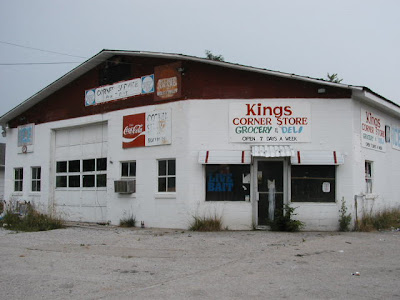 In the 1950s Corner Service Station was a thriving garage and grocery at the halfway point between Lancaster and Richmond on Highway 52. It died out in the 1980s, then was revived for awhile as King's Corner Store.... but, as Neil Diamond says, "that died too". Now it's a desolate relic filled with garbage coated with bird droppings, or at least it was when I took these photos a few years ago. 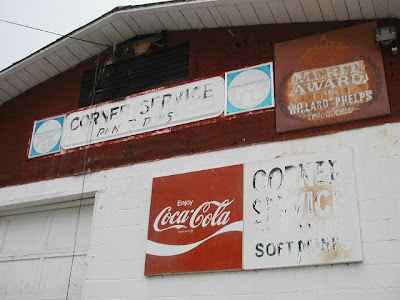 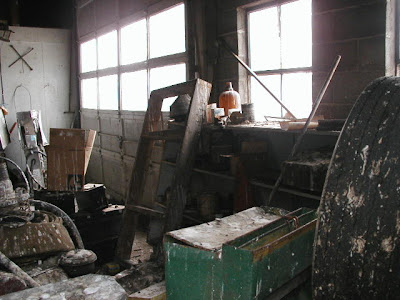 I don't understand why these kind of places die out. At the time these photos were taken, there was no other kind of grocery or quickie-mart around for miles, and there hadn't been in quite some time. And yet, there are a lot of people that live out here.... don't these people need snacks, soda, and scratch-offs, fer gosh sakes?? 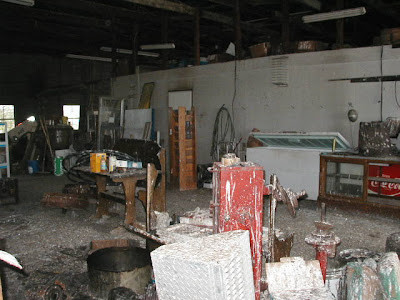 As an aficionado of old mom-and-pop grocery stores, even dead ones hold my interest, especially ones that are still so intact and hold such mythic resonance. Has anyone been way out Lancaster Road lately and noticed what's become of this place?
Posted by JSH at 11:42 PM

I finally made it out that way today. the place is still there but they've taken all the signage off the front and perhaps even threw some paint on it. It's on Lancaster Road (52) and 1295. I snapped a few pictures if you'd like me to send them to you for an update post or something.

Just so you know Kings corner store is no longer standing. It was destroyed in may of 2009 due to the f-3 tornado that swept across madison county. Just thought you should know.

I GREW IN THAT STORE JESS MILLER OWNED IT AT THE TIME. HE WAS SO SWEET HE USED TO GIVE ME A LITTLE BROWN BAG FULL OF HOT ATOMIC FIRE BALLS. I LIVED ABOUT A 1/2 MILE FROM THERE. I GREW UP IN THAT AREA, I HATED TO SEE THE STORM TAKE IT AWAY ALONG WITH ALOT OF OTHER MEMORIES I HAD.