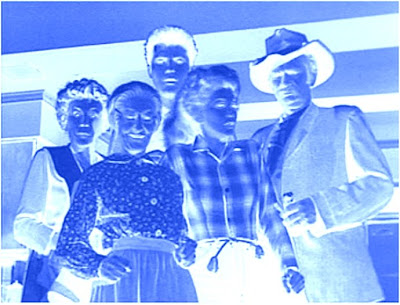 This subject has always been one of the trickier ones for me to write about. Although the blue people of Kentucky are a real phenomenon that has been well documented and written about in all manner of publications from science journals to mass-market magazines, I really don't want you goofballs loading your cameras and going on a gawking spree, bothering innocent people. But it’s too fascinating a story not to tell:

From at least the year 1800 to the 1960s, multiple families of blue-skinned people made their home along Troublesome Creek near Hazard, KY. Local superstitions and rumors about them were rampant, and included theories that they were either aliens, angels, or a separate race of humans. Apparently, it all began with a blue-skinned family called the Fugates, who came to the Hazard area in the late 18th or early 19th century. They descended from one Martin Fugate, who supposedly came from France (just like the alien Coneheads from Saturday Night Live!)

In the 1960s, a Lexington hematologist named Madison Cawein suggested the blueness could be caused by an extremely rare disorder called methemoglobinemia, in which the patient has an abnormally high level of methemoglobin in the blood. This in turn causes one's skin to be tinted blue.

Cawein injected a chemical dye substitute for the missing enzyme into some test members of the Fugate family, and within minutes their skin turned pink. Many of the blue Kentuckians came out of rural seclusion to seek the treatment, but others, it is said, chose to remain blue. Unfortunately, to my knowledge, there have been no reliable sightings of them since 1979. And the very few old family photographs known to exist of the blue-skinned people were taken in the 1940s and 1950s with, alas, black and white film.

It is unknown how many, if any, blue-skinned people still exist in Kentucky, but their lack of visibility would seem to indicate they want to be left alone. There’s a story about a Hollywood camera crew getting shot at and chased away by dogs when they trespassed on a blue person’s land.

According to an article in Science 82 magazine, these families were intensely inbreeding and intermarrying, which perpetuated the methemoglobinemia gene on both sides.

Despite what we are told about the disastrous effects of inbreeding, these people did it consistently for generations with seemingly no ill effects: the Fugates were not impaired in terms of mental or physical abilities in any way. One woman (with the wonderful name of Luna) gave birth to 13 healthy blue children and lived to be 84. And while most people with methemoglobinemia acquire it through health-threatening circumstances such as heart and artery defects, nitrate poisoning (“Blue baby syndrome”) or respiratory problems, the Fugates and the other blue families were in perfect health and lived long robust lives.

And thus another wonderful bit of human uniqueness is eradicated by modern technology. Me, I’d love to see deliberately induced blueness become a new fad in body modification.
Posted by JSH at 9:08 PM

I am a direct descendant of the blue people, but I fake-bake to a nice golden color :)

I am also, but I use the spray on tan... Its better for the skin.

I am waiting for your book to arrive since I ordered it online. I've done a search online and wondered if you covered the so called Melungeon people of KY and the different theories they present about their heritage? Also, have you covered the "brown people" of Magoffin KY and Carmel OH? They consider themselves to be tri-racial. (caucasian, african american (pre-civil war era I believe), and native american. The latter I mentioned had differences in language that was interesting from the general population. I would be interested to see you cover those aspects of KY.

Katie @ On the Banks of Squaw Creek said...

I'm printing this for my students to read! Thanks!

My grandmother was Wanda Fugate, but we aren't inbred. I think that magazine may have been perpetuating an old stereotype. I have been researching our genealogy and haven't seen anything to suggest that, thank goodness. I would puke!

I was wondering about that myself, Nicosia... the evidence just doesn't add up from what I can see. I think the Science 82 article has a lot of bad information.