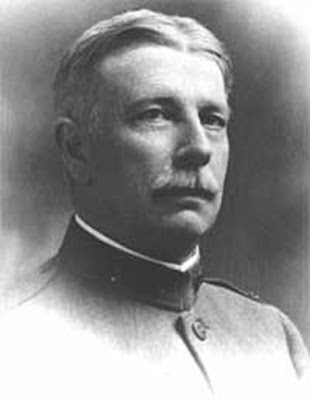 The "Tommy Gun", or Thompson Machine Gun, was invented by a Kentuckian: John T. Thompson, who attended Indiana University in Bloomington before going on to a military career. The Thompson gun was popular among everyone - soldiers, civilians, police and criminals - because of its compactness, portability, large .45 caliber, and extremely high rate of automatic fire. Although rendered somewhat unrealistically in many Hollywood films, the Coen Brothers classic Miller's Crossing does a great job of demonstrating the characteristics of how the Thompson gun operates.

In 1904, President Roosevelt and his Chief of Army Ordnance William Crozier gave Thompson, along with Major Louis Anatole LaGarde of the Medical Corps, the mission to scientifically investigate which caliber guns performed the best. At the Nelson Morris Company Union Stockyards in Chicago, Thompson and LaGarde tested several types of handguns and ammo by firing them into human cadavers and live cattle. Cows that took too long to die after being shot were put down by a hammer blow to the head.

The Thompson-LaGarde Cadaver Tests of 1904 are today regarded as barbaric and completely unscientific. In fact, according to this site, Thompson and LaGarde fudged the data to give the desired result to their superiors.

Thompson's submachine gun was greatly popular with gangsters in the 20s and 30s, known in the underworld as a "chopper" or "Chicago Typewriter". The gun became standard issue for the U.S. Army in World War II.
Posted by JSH at 12:01 AM