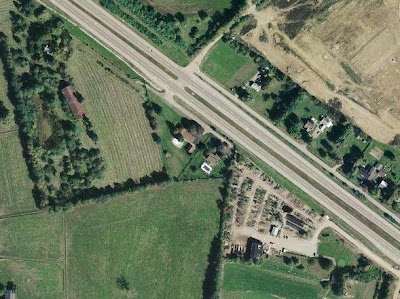 Earlier this month, we reported on an odd blurred spot on a Google Maps image of Lexington. A reader has pointed out that the Yahoo Maps image of the corresponding coordinates, as seen above, is unblurred. It's still most likely just a random accidental digital artifact; but it is interesting to note that the glitch just happens to neatly obscure these two houses, as well as the short turn-off road that services these two specific homes.

Curiouser still, this road doesn't show up on Google when you put the image in "map" mode, but it does on Yahoo. Now mind you, digital glitches do show up on Google's satellite images from time to time, and mistakes do happen on Google's map images, but that the obscuring of this road should occur simultaneously by accident on this very spot in both images from their satellite source and from their map source, well, now that is very odd indeed. 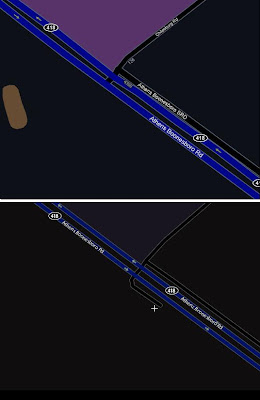 The Yahoo Maps are also noticeably more recent than their Google counterparts. Numerous new housing developments have been built in the area that don't show up on the Google images.
Posted by JSH at 9:21 PM