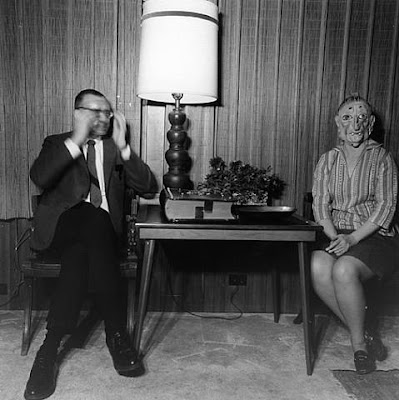 Ralph Eugene Meatyard, a humble optician from Lexington, KY, unwittingly became one of the twentieth century's greatest - and weirdest - photographers when he took up the hobby of taking photographs of his children in the 1950s. Gradually his photos took on more and more of a "Southern Gothic" feel, with his children looking menacing and sullen (sometimes even wearing horrific masks) among the crumbling debris of old rotting houses in the country. I quote from an essay by Mario Cutajar:

The images he is justly renowned for are ones of children and adults wearing dime-store Halloween masks. The device is so transparent that part of the pictures' intrigue is why they work at all. They do because of Meatyard's eye for setting and pose, because of his ability to extract startling black-and-white contrasts from the silver-rich photographic paper he used (contrasts that create amorphous voids out of which the masked figures materialize like apparitions), but just as importantly because Meatyard never tried to disguise his artifice. Later on toward the premature end of his life when he shot the Lucybelle Crater series, he even dispensed with the murky backgrounds and relied entirely on the transgressive impact of his masked figures nonchalantly inhabiting the daylit world like regular folk--as if they belonged.

These grotesques (which were only a fraction of Meatyard's output but which were the fruit of an obsession that endured throughout his life) are most closely allied to painterly antecedents than photographic ones. They recall the odd family portraits painted by the Douanier Rousseau, Ensor's masked characters, and, more distantly, Goya's caricatures. Their psychic source can easily be located in a sense of estrangement from the world that crosses over into depersonalization, except that Meatyard--who made his living as an optician, raised a family, and lived a settled life in Lexington, Kentucky--was not a withdrawn or morose individual. The singular oddness of his work intimates, rather, an appreciation of the more ubiquitous and easily overlooked oddness of individuality itself and of the dissociation inherent in the photographic process, whose arrest of time makes moments eternal at the price of removing them from our possession.

On May 6, 1972, Meatyard, diagnosed with terminal cancer, watched Riva Ridge win the Kentucky Derby on television. He died in his sleep during the night, in the early hours of May 7.
Posted by JSH at 12:00 AM

Ohhh Southern Gothic photography. I'll order one of his books when I order yours. Thanks, I had never heard of him.