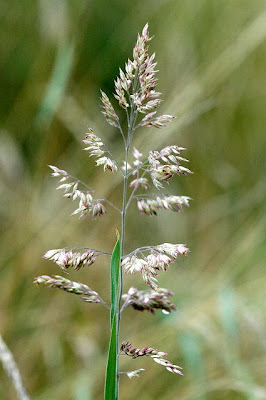 For a fledgling tourist to Kentucky, one of the biggest mysteries is "where is the blue grass?" Often have I heard newbies inquiring about where to find it, and I've even heard them pull the wool over their own eyes and convince themselves that they're seeing it: "oh, look, Martha, the grass really is kinda bluish here."

Blue grass is a common grass called poa pratensis, and it's only blue when you allow it grow tall like weeds, so that the blue-flowered seed heads can bloom in Spring. Ironically, because Kentucky is "horse country" and thus covered in groomed and manicured farms, you rarely ever see fields of unmown blue grass. Small patches of poa pratensis are everywhere you look, to be sure, but it takes a whole huge vista of rolling hills covered in the flowering plants to get that "blue" effect.

Despite popular assumptions, poa pratensis isn't even especially indigenous to Kentucky. It's an extremely common plant in North America, and all across the world. Had some other plant, such as Witch Hazel, Ginseng or Devil's Trumpet, become the official symbol of Kentucky instead, bluegrass music might have ended up being called "Devil's Trumpet Music". Then tourists would then be wondering why there's no trumpets in Devil's Trumpet Music. And can you imagine the Devil's Trumpet Army Depot?
Posted by JSH at 12:20 AM