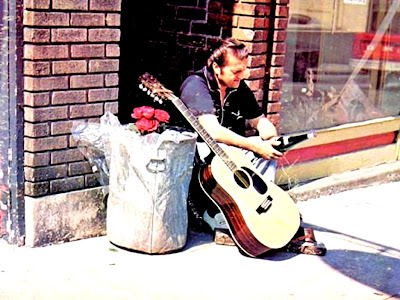 For many of us, our first exposure to the lore of Carlos "Little Enis" Toadvine came by way of Ed McClanahan's great book Famous People I Have Known. In it, McClanahan devotes an entire chapter to the memory of the less-than-famous Toadvine, and started a posthumous legend for the man that just keeps snowballing today.

When I first got hooked up to 'teh interwebs' in the 90s, there was zero information to be found on this elusive mystery man, reknowned for his Elvis impersonations and his idiosyncratic guitar-picking method. Enis was left handed but did not restring his guitar to accomodate this; he simply learned the chords as-is. And instead of gripping the guitar from beneath the neck and biting down on the strings, he "walked" on the strings from above, in a sort of tapping technique that predated Eddie Van Halen.

Today, however, the beauty of the internet age is that even Carlos Toadvine gets his day in the cyber sun, and there's a fantastic site called Gary's Country that gives the man the treatment he deserves. There's photographs galore, many of them straight from the Toadvine family albums, and best of all - mp3 files!

Enis' peculiar country-rockabilly act played an important part in Lexington's local music history, being a regular at the Zebra Lounge, the Continental Inn, The Palms, and someplace called "The Night Light". Does anyone know where in Lexington this alley is that he's sitting in the above photo?
Posted by JSH at 2:07 PM

Not sure what you are looking to know about Little Enis. I am his cousin and remember the times he would come to our house and just jam with the rest of the family. These are some of my favorite childhood memory. He was older than me and I always looked up to him and his talent. He is missed greatly.

My family and I lived next door to Little Enis in the 70s. His daughter, Donna Faye, and I were classmates. The photo on his record album was taken at the corner of Rose Street and High Street in Lexington, KY. The building still stands.