They Put Them Up, I Take Them Down 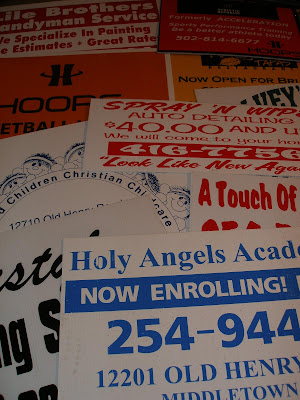 A recent rant of mine from the Transylvania Gentlemen blog:

As you may know, I'm big on getting rid of plastics in our environment, since they have a bad tendency to slough off plastic molecules and in so doing, are poisoning our ecosystem.

So it should come as no surprise to anyone that I have been waging a personal vendetta against "guerilla advertising" corrugated plastic signs that glut roadsides all across our fair state. Not only are they ugly, but they're literally harming the environment. 99.9 percent of these signs are never retrieved by the people who disseminate them; they usually end up being taken down by city employees or, more often, they just fall down or blow away. I've found dozens of these things littering roadside gulches, laying flat and covered in mud and weeds.

Not only that, but the vast majority of these signs are illegally placed on someone else's property, usually public property. I'm not talking about a small business that puts a plastic sign out in front of their own store, or even in the median of the road nearby; I cut some slack for instances such as this, even though the plastic aspect still irks me. Nothing wrong with trying to advertise a sale for your store near your store, but most of the plastic signs out there are from businesses that chose to blanket the entire county and beyond.

And then there's the worst offenders of them all: national companies that cover the nation with the same stupid plastic signs. These are usually weight-loss scams, suspicious "job opportunity" announcements with toll free numbers, religious proselytizing, predatory lenders, and "We Buy Houses" real estate moguls. Then there's all the political campaign signs that never get taken down from all the places they were illegally stuck in the first place.

So, I've made it a habit of plucking these signs whenever I see them. Usually it's on an as-encountered basis, and I've often raced out of the car at a red light to snatch plastic signs off poles and from intersections, toss them in the back of the car, and throw it back into Drive with seconds to spare. Other times, when I'm feeling particularly onamissionfromgod, I'll drive around late at night and clean up the city of these wretched things. 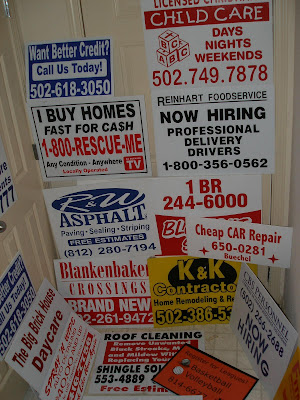 Which begs the question, what the hell do I do with them now? I have a huge collection of signs, hundreds in a spare bedroom at home and hundreds more in storage. I don't really want to throw them away because they'll end up in the dump and pollute the groundwater. Most likely, I'll do the same thing I did with my leftover Project Egg eggs: when in doubt, turn 'em into art. Not sure what sort of art project I will come up with to incorporate these signs, but I'm sure I'll think of somethin'. Meanwhile, dear readers, I beseech thee to help keep Kentucky beautiful and help nip these signs in the bud whenever you encounter them yourselves.

Aren't they recyclable? Or are they that grade of plastic that is too far gone to be melted down and reused?

Dunno. They don't put recycling codes on these things, but they're almost certainly classified as #7.

I just read the article you linked to under 'this guy'...

"The city actually does encourage volunteers like Nenslo, so long as they do not damage painted light posts."

Who exactly is responsible for the damage here, again??? It's like 'give us a million dollars but we won't accept 1,5,10 or 20 dollar bills'...well...you know what I mean. It's illegal to post signs like this but we'll not like it if someone volunteers to remove AN ILLEGAL SIGN and the pole ends up 'damaged'...I'm a HUGE fan of this kind of logic...