The interesting characters, past and present, that have populated Madison County's downtown area (especially the bars and pool halls) could fill an entire book or an entire blog all to themselves. (And sooner or later, I will do just that. All in time.) I know, or have known, men of mythic grandeur who walked the streets of Richmond bearing sobriquets such as Pee Wee, Peanut, Beech-nut, Shorty, Wavy, Popsicle, and Buckhorn.

The mysterious and often inscrutable Buckhorn, now deceased, was a good friend of mine, loved by all who knew him in Madison County. And just about everybody knew him.

In the 80s and 90s, if you drove kids to school in the mornings or got up early for work, you probably heard his morning radio show on Richmond's WEKY-AM. His avant-garde rendition of "Happy Birthday To You" was a notorious local hit of sorts, and kept the station console's VU meters laying in the red. Often people would call in fraudently claiming it was their birthday, just to hear the man belt it out, his way, one more time.

He gained great notoriety for zipping all over town on his motorcycle (and usually ignoring all traffic laws). It's doubtful Buckhorn even had a license, but he had a sort of a "Jedi Mind Trick" aura around him that made everyone just accept it. He was befriended by everyone from bankers to farmers in his day to day travels, and college students revered him as the eccentric custodian at several local bars as they closed each night.

However, Buckhorn’s true glory lay on two other fronts:

First and foremost, Buckhorn was the quintessential wheeler-dealer. Buckhorn always had something to sell, and like "Skinny" in the famous Residents song, Buckhorn sold something every single day. He would swagger into Taylor's Billiards, open up his coat to reveal an entire store inside, like a bad old movie's "wanna buy a watch?" street hustler. He had watches, coins, pocket knives (Case XX ones were his favorite), old collectible cigarette lighters, antique silver cigarette cases, etc. All day long Buckhorn sped on his cycle from flea market to bar to junk store to pool hall, endlessly buying and selling like a one-man pawn shop a-go-go.

And secondly, Buckhorn had a special place in his heart for radios. He loved to fix, repair and restore antique radios, and proof of his occult powers is the fact that he repaired them often, and repaired them quite well, even though he knew little or nothing about the fundamentals of electronics except what he had taught himself through trial and error, and had little formal education (he apparently could not read or write, at least not very well).

"I just wuk on 'em till they do right," Buckhorn said of his repair technique. He had a huge collection of old tubes and parts, but his methods for choosing appropriate replacement ones for radios were a cryptic, mysterious, spiritual matter, the mechanisms of which were known only to himself. He usually polished his tubes until the serial numbers were worn off anyway. And yet he conjured and coaxed new life into dead radios. How he did it remains a mystery. "Wal, I reckon it's got that Buckhorn Quietus on it," he would say when a piece was finished.

For those who did not have the opportunity to hear Buckhorn's voice, it was a powerful thing: a deep-south Louisiana-like upwardly-lilting drawl utterly out of place for someone who'd never left Kentucky in his life, creaky and full of character like a merging of William S.Burroughs, Justin Wilson and Emo Phillips. Add to this the trait of repeating some words and phrases twice, and a delightfully squeaky and childish laugh that clashed with his rough, grizzled appearance. 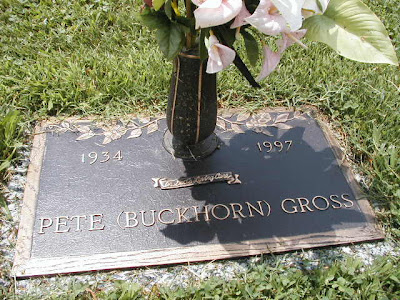 Buckhorn died on his motorcycle in an accident in 1997. The story is told, whether apocryphal or not, that he smashed into a lamppost in an effort to swerve and avoid a young girl who walked directly in front of his motorcycle's path.

Some video footage of Buckhorn was preserved on a short project done by an EKU student for a class in the early 90s. I have a copy - probably the only copy - and will put it on YouTube eventually as a tribute to Buckhorn's memory. Stay tuned.
Posted by JSH at 12:31 AM