The Louisville Sewer Explosions of 1981 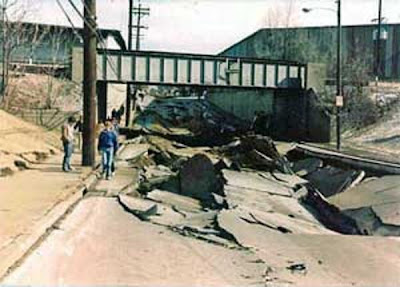 On Friday the 13th, Feb. 13, 1981, a series of powerful underground explosions shook downtown Louisville. Cars were sent flying through the air, parts of buildings collapsed, streets buckled inward, manhole covers popped off with deadly velocity. Many people's bathrooms exploded into fountains of sewage.

Pedestrians were terrified that an earthquake was taking place. Still others believed it was the end of the world, as a sulphurous sewage stench filled the air all over town. Raw sewage began to fill some streets, three feet high and rising.

It was determined that the reason Louisville's sewer lines had exploded was because someone had been dumping massive amounts of Hexane into the public sewers. That someone turned out to be the Floyd Street Ralston-Purina plant southeast of U of L's campus, which was using Hexane to remove oil from soybeans (And that in itself is a frightening thought for a number of reasons).

Although battered by an onslaught of lawsuits holding them responsible for millions of dollars worth of damage, Ralston-Purina paid up and continued to operate the plant until Fall 1984, when it sold out the Floyd Street plant to Cargill. After that, other Ralston-Purina plants in the area began to be sold off until 1997 when they were all gone and Ralston-Purina no longer had a Jefferson County presence.

I'm not sure if anyone else has ever vocalized this thought before, but it occurs to me that Louisville's ongoing stinky-sewer problem could be a direct result of lingering structural damage caused by Ralston-Purina's negligence. Is it too late to go back and shake 'em down for more money?
Posted by JSH at 6:58 PM