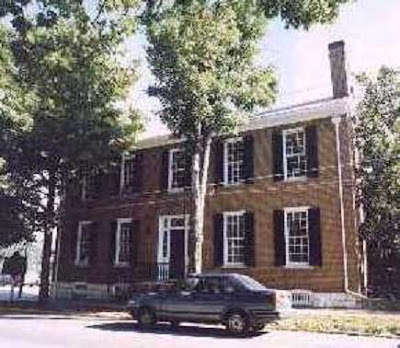 There's been reports that the Vest-Lindsey House, located at 401 Wapping Street in Frankfort, is haunted by the ghost of George Graham Vest.

I'm not sure how these ghostly identifications end up getting made. Did a ghost say, "hello, I'm George Vest"? Did an eyewitness recognize an apparition as resembling that of Vest's old photos? Or - more likely - did someone hear a weird noise late one night and decide that all of the people who occupied the home over the years, it must logically be the ghost of its most famous occupant, back to haunt his boyhood home for reasons known only to himself?

Of course, this whole area of Frankfort is filled with spooky old haunted historic homes, and I am not of the opinion that a ghost is required to stick to his own turf. I'm sure the area is crawling with spirits at any given time, but who knows whose they really are, where they're going, or what they're up to.

Vest himself was an interesting character, at any rate. As an attorney, he risked his life to defend a young African-American man from bogus murder charges. The man was acquitted, but a local lynch mob burned him at the stake anyway. Yet as a statesman, Vest sided with the Confederacy during the Civil War and became a Confederate State Senator for Missouri.

Today, Vest is most remembered for having coined the phrase "a dog is man's best friend" during the Burden v. Hornsby trial, defending a man whose hunting dog, "Old Drum", was shot and killed by a landowner on whose property the dog had trespassed.
Posted by JSH at 1:15 PM